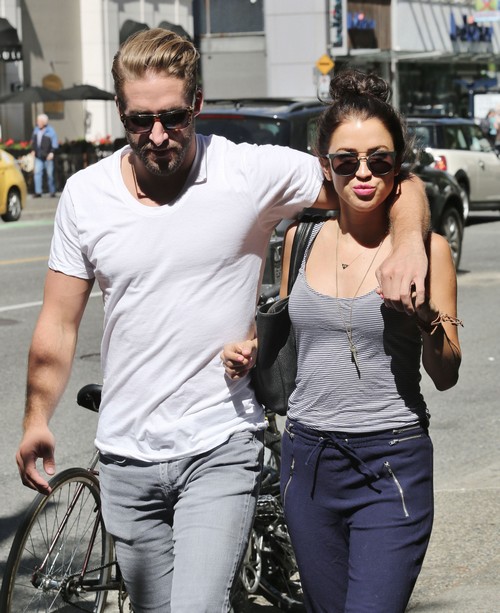 The Bachelorette 2015 Kaitlyn Bristowe and Shawn Booth’s marriage is probably not going to happen – the wedding is on hold and the showmance couple have no plans to get hitched. The couple got engaged during the season finale of the reality TV show – and they swore up and down that their relationship was the real deal and they were really getting married unlike the majority of the previous seasons’ stars. But, the months are ticking by since their engagement, and the couple still hasn’t set a wedding date – sources close to the couple are certain there is a break-up in their near future.

A reporter from Life & Style Magazine caught up with Shawn Booth and Kaitlyn Bristowe at a recent event, and asked them to dish on their wedding plans – but they didn’t have any! The couple confessed to Life & Style, “We haven’t set any dates yet. We’re just enjoying the engagement.” Sound familiar? Well, it should because that is basically the exact same thing that both Chris Soules and Whitney Bischoff and Andi Dorfman and Josh Murray said to reporters about their wedding plans right before their break-ups.

An insider close to the couple explained to Life & Style, “They still haven’t even moved in together. They also were talking about doing all of these projects together, but they aren’t working on anything!” It looks like the excitement of their engagement has officially worn off, and now that no one seems to really be interested in their relationship any more, Kaitlyn and Shawn don’t seem to be in any rush to make it official and set a wedding date. They haven’t even made it official and put both of their names on a lease! Shawn and Kaitlyn seem to be all talk when it comes to making a real commitment to their relationship, this could be the beginning of the end.

What do you guys think? Should we be worried that Shawn Booth and Kaitlyn Bristowe seem to have put their wedding plans on hold, are they breaking up soon? Let us know what you think in the comments below!