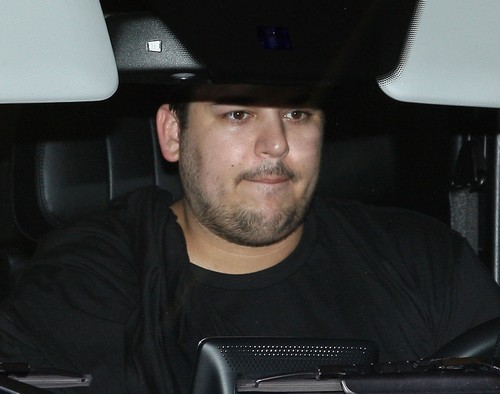 Kanye West is ready to attack Rob Kardashian for comparing his sister Kim Kardashian to a blood-soaked lunatic, but Kim sided against Kanye and backed up her brother. Kanye West is angry. Like Chris Brown discovering someone ate the last Snack Pack angry. Rob Kardashian started his return to Instagram by unfollowing his entire family. The quietest and most disturbed of the Kardashians then posted an image, Amy from ‘Gone Girl’ and compared it to his sister, Kim Kardashian. Spoiler alert – Kim is selfish, manipulative, and will do anything to get what she wants… So is Amy from ‘Gone Girl.’ The caption of the bloody character read – “This is my sister kim , the bitch from Gone Girl,,,”

The comparison sent Kanye into a fit, and according Britain’s New magazine via Radar, the couple got into a fight over the issue. Kim wanted to brush it off, but Kanye West insisted, “No one, not even family, has the right to disrespect the mother of his child and there’s no excuse.”

Kanye wanted to attack Rob for being so “disrespectful,” but Kim insisted it was not worth worrying about. After they argued, she eventually got Kanye to calm down, but the protégé of Jay-Z insists on confronting him. “Kanye wants to meet up with Rob and have a man-to-man talk about his anger issues.”

Rob Kardashian has been hiding out and avoiding the public. His self-image issue centering around his weight played a large part in his seclusion, but rumors that began last summer claim Rob is battling a drug problem. Basically, he’s like the Gollum of the Kardashian family. Rob allegedly sat around drinking Sizzurp and smoking weed since Kris Jenner has no use for someone who she can’t hook out to Playboy or marry off to someone who is actually relevant.

Rob has been absent from social media networks lately, and Kardashian insiders told People that the entire family, sans Kanye, wasn’t bothered by the offensive post and dubbed it, “so dumb” instead. However, some of the family remains concerned. The source says the family fears Robert Kardashian is battling some bigger demons. “He’s been depressed and just a bit off in general. But he has always been this way. He just can’t lose the weight and he doesn’t try – he just sits around.”

It looks Rob Kardashian has some bigger problems than simply keeping up with Kardashians. Do you think he is depressed and still battling a drug addiction? Was his post just a bad joke or a genuine dig at Kim Kardashian?