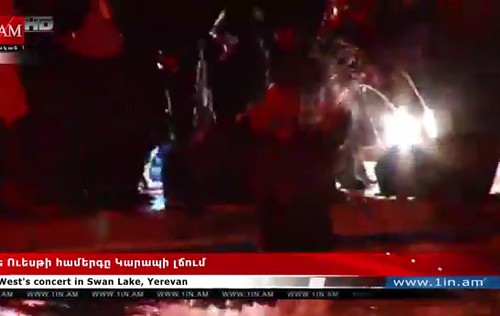 This week, rapper Kanye West has been with his wife, Kim Kardashian, and his sister-in-law, Khloe Kardashian, along with their two cousins, accompanying them on their pilgrimage to Armenia. For the most part, the trip was meant for recreational purposes, and to pay respect to those who were lost in the Armenian genocide, although as we reported earlier, the Armenian people were offended by the Kardashian’s choice of wardrobe for the occasion. Of course, Kanye West could not go anywhere without taking some time to make things about him.

Mr. West decided to throw his Armenian fans a surprise concert at Swan Lake- Karapi Lich in Yerevan on Sunday, April 12, at night. Kim Kardahsian and Kanye surprised their fans with the concert, letting them know last minute. Kim tweeted, “Kanye is doing a free concert for everyone in Yerevan at midnight tonight Swan Lake – Karapi Litch! See you there!”

The free event would have been a nice gesture, had it actually went smoothly.

The controversial rapper performed hits like “Stronger,” “All of the Lights,” “Power,” “Jesus Walks,” and more. Kanye, or should we say the police, ended the show early when West decided to jump into a giant lake while performing “Good Life.”

After Kanye jumped into the lake, it provoked the countless of fans watching the free show, to follow his lead and jump in with him. The fans formed a sort of mosh pit and mobbed Kanye in the lake, forcing security and police to rush in and end the concert. Kanye got out of the lake and left, and his fans left the area. Just like that, the show was over.

Check out the video for yourself. Skip ahead to the 1:03:00 mark to see it all go down. We know Kanye thinks he is a god of some sort, but hopefully this will remind him that he actually can’t walk on water. Was Kim Kardashian embarrassed by this debacle? Better question, does Kim Kardashian have any shame? What do you think of the artist’s crazy actions? Let us know in the comments below.

Check after the 1 hr 3 min mark to see Kanye literally jump in the lake, Swan Lake!