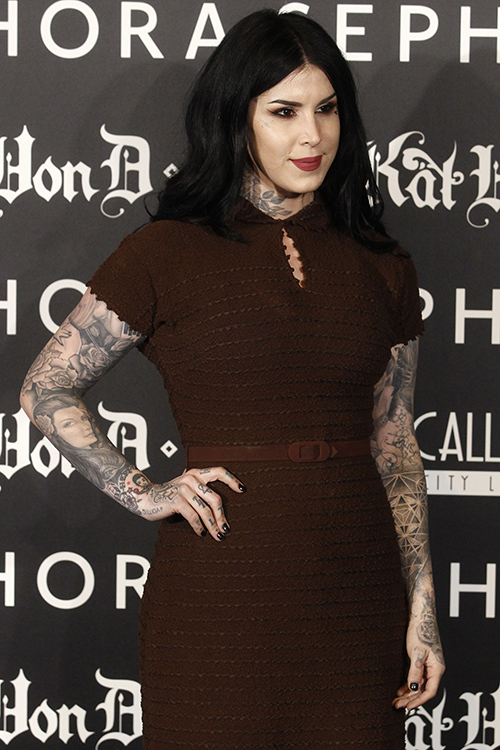 Kat Von D has confirmed she is dating Steve-O in what most consider an unlikely relationship. Fans of Kat and Steve-O weren’t incredibly shocked about the odd coupling but everyone else was caught off guard. The tattooist and her prankster boyfriend have been making appearances in each other’s social media here and there. Kat Von D and Steve-O’s documented hangouts started speculation that something romantic may be going on between them,

All suspicion was erased on Tuesday, December 29 when Kat Von D posted a picture of herself kissing Steve-O on Instagram. The photo caption read, “Thank you, @officiallysteveo, for breaking the spell,” followed by a heart emoji.

Steve-O is possibly even more excited to spread the news of his love. The pair must be pretty serious because the Jackass stuntman posted a relatively unnoticed message about Kat that read, “I know it’s crazy that I became a clean and sober, hybrid-driving, animal-rescuing vegan who’s super into meditating, but I’m glad I did.” Steve-O continued, “I’m even happier that I get to spend so much time with a shockingly gorgeous and amazingly talented woman who is all of those things, kinda wild like me, and doesn’t give a f*** how many teeth I really have.”

All of the pictures the lovebirds post of each other are tagged to each other. It’s obvious that Kat and Steve-O are really enjoying each other right now and just wanted to share their relationship with the world. The stuntman has never been anything but blunt and often really crass. Maybe Kat likes Steve-O’s rough-around-the-edges style.

It wasn’t until the mutual kissing pictures went up on Wednesday that everyone got the hint and then some. Steve-O’s picture was captioned, “How can I be so lucky?” It’s a pretty safe bet that a lot of other people are also wondering how the Jackass star got so lucky as well. As it turns out, the unlikely couple may have more in common than anyone thinks. Kat Von D and Steve-O are looking pretty serious. Will there be wedding bells?