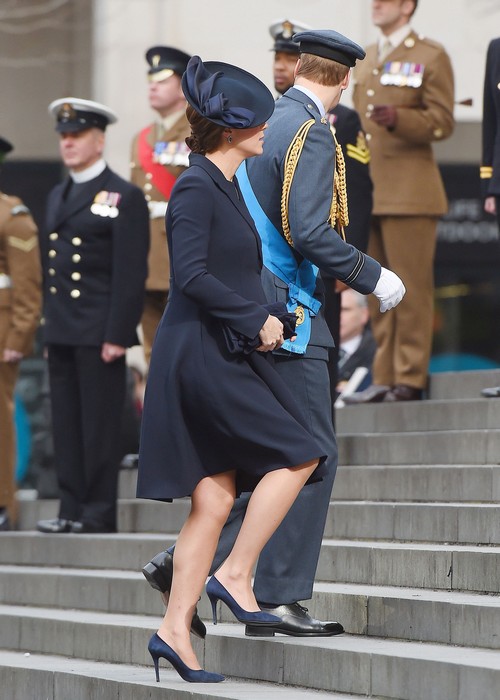 Kate and Will were greeted by the Lord Mayor of London the minute they arrived, and they soon made their way inside the cathedral after waving at the crowds. Kate and Will looked spiffy, with William in full military dress and Kate wearing a dark blue coat and hat. Surprisingly, her baby bump was barely visible under the coat, so one has to wonder whether Kate has just smushed it down in her efforts to keep it hidden – or whether she’s just wearing a strategically placed coat. For whatever reason, Kate Middleton’s been very hesitant to visually acknowledge her pregnancy, going to great lengths to cover her baby bump – even though she’s now weeks away from giving birth, at that.

It’s also shocking how the royals continue to use Kate for all these public appearances, although this is one of the larger profile events that she’s attended recently. But in the last week alone, it’s seemed like she’s stepped out almost every day, which is more than we can say for her husband… or really, the rest of the royal family. It’s because the royals know that Kate earns the most publicity for the least amount of work possible, and they still need that PR to distract from all the negative press the royals have been getting lately – mainly thanks to Prince Andrew’s underage sex scandal.

What do you guys think about Kate Middleton’s appearance at St. Paul’s Cathedral? Do you think she should be given a break from her constant royal engagements? Let us know your thoughts in the comments below.

Fame Flynet: The Royal Family and British politicians visit St Paul’s Cathedral for a Service of Commemoration for troops who were stationed in Afghanistan