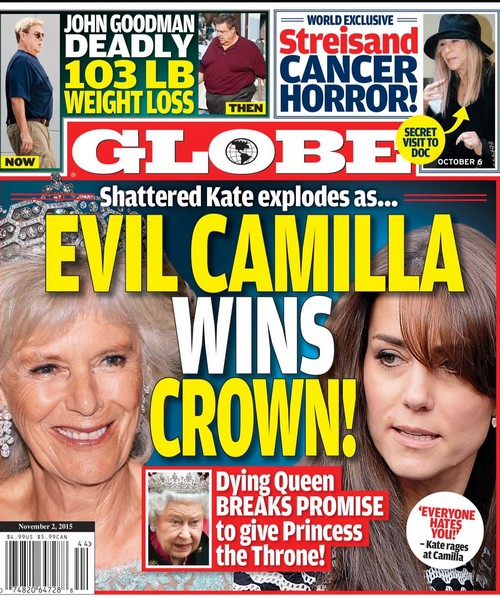 Prince William is worried that his wife is buckling under the pressure as Camilla constantly humiliates the mother of his children. Wills is especially concerned that Princess Kate is suffering from anorexia.

A source told GLOBE, “Judging by the Duchess of Cambridge’s sudden weight loss, Camilla has managed to get into her head.” Apparently Prince Charles’s wife is absolutely mad with power and more determined than ever to stand beside her prince charming and be crowned queen.

To add fuel to the fire the woman who destroyed Princess Diana’s marriage may soon get everything she has ever wanted. A secret report has allegedly been leaked that Queen Elizabeth is dying and her top advisors are urging her to pass the crown to her son and daughter-in-law. According to sources close to the royal family this announcement should come within the next few weeks.

Kate Middleton and Prince William have been rumored to be Queen Elizabeth’s first choice as her successors but those closest to her believe the Duke of Cambridge needs more time to “train” – as does Duchess Kate – in order to rule the United Kingdom.

And that’s just what Camilla Parker-Bowles is counting on! She can barely contain her joy at the thought of making the uber-popular Duchess of Cambridge curtsy to her – and she’s nearly giddy with excitement that she’ll be the most senior royal in Britain and that Kate Middleton will be forced to call her step-mother-in-law “Your Majesty.” The GLOBE insider says, “She told William’s wife, ‘This is my time and soon everyone will be calling me Queen Camilla – including YOU!”

Even though Camilla Parker-Bowles has told Kate Middleton that she will destroy her, Duchess Kate isn’t going down without a fight and stood up to Camilla saying, “You are pure evil – the people hate you. And so do I!” But even though Duchess Kate appears to have stood up to the future Queen of England her drastic weight loss would indicate that the constant assault is getting to her.

Royal watchers were shocked to see how thin Prince William’s wife appeared at her recent visit to Harrow College where she attended a conference to mark World Mental Health Day on October 10. A close friend allegedly says, “She hasn’t been sleeping and is hardly eating.”

Camilla’s backstabbing was the reason Princess Diana developed anorexia. The Prince of Wales mistress became so jealous she was determined to destroy Diana – and she did.

Now Camilla Parker-Bowles wants to collect her reward and she’s not going to let Kate Middleton stand in the path as she heads toward the throne. Whatever it is that Camilla needs to do to be crowned Queen she’s going to do it – no matter who she hurts – that crown will sit upon her head. Return to CDL often for all your royal news!

Prince William, Duke of Cambridge and the Kate Middleton, Duchess of Cambridge, attend an official event in Dundee, Scotland on October 23, 2015. FameFlynet