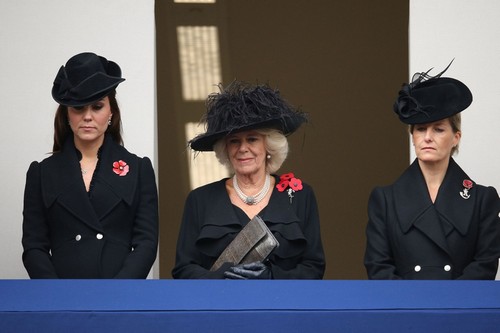 Is Kate Middleton an entitled and lazy spoiled brat who is totally slacking off and taking advantage of her position of ridiculous royal privilege? Kate Middleton has endured severe morning sickness throughout much of her first and second pregnancies. Now, pregnant with her second child, she has not only had to deal with the first few months of illness, but has young Prince George to care for as well. However, does that excuse the Duchess of Cambridge of participating in only 76 public engagements compared to Prince Philip’s 200? The fact that Prince Philip is 93-years-old almost mocks Kate’s excuse of morning sickness.

In a survey conducted by the Daily Mail, it was discovered that Kate Middleton is thought to be the “slacker” among the 15 royals polled regarding their participation in public duties as they represent the royal party, reports E! Online. The poll showed Queen Elizabeth as the record holder who, at 88 years old, appeared at approximately 375 events—sometimes more than six in one day!

Sources reportedly have shared that Kate’s focus in the first couple years as a royal is meant to be on the royal family, her children, and being a wife to Prince William. The Queen has reportedly supported this decision, but only 76 events? Seems quite low for a 32-year-old royal. The site claims the real winner is Prince Charles who had attended the highest amount of events—a staggering 450 public engagements! Perhaps he uses that as an excuse to escape spouse Camilla Parker-Bowles, Duchess of Cornwall.

Kate may be putting more effort in now that she has triumphed over the morning sickness from her pregnancy and recently travelled with Prince Williams to the US, including New York. The couple attended several events, including some fun time as well. Kate Middleton and Prince William were snapped at an NBA game chatting with Beyonce and Jay-Z. She was famously pictured with LeBron James after he committed a royal sin by putting his sweaty arm around her royal highness. Kate also spent time at a child development center in Harlem. Perhaps the poll results will challenge Kate Middleton to step up her duties so she’s no longer behind the 88 and 93 year olds!