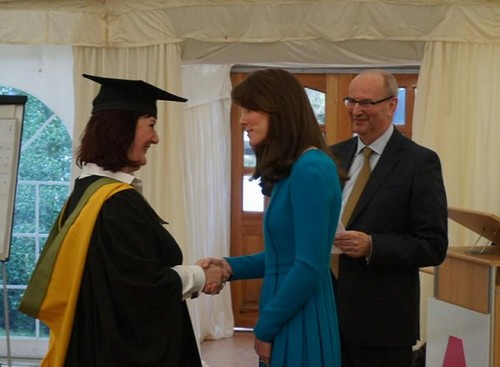 CDL was first to report Kate and her family – Michael and Carole Middleton along with James and Pippa Middleton – have managed to break royal protocol and take control of Christmas.

Typically, the royals attend a special Christmas morning church service with Queen Elizabeth before spending the rest of the day at stuffy lunches and watching the Queen’s speech. Prince William revealed his family will attend church, but didn’t address the plans after going to the Christmas mass.

William is dodging the details of his Christmas plans after church because Kate Middleton and her family have taken over the holiday, which makes the Queen furious.

Royal Christmas is not exactly family-friendly. Prince William and Prince Harry were both 5 before they were allowed to attend the Christmas church service at the insistence of Princess Diana. In addition to family separation, children under the age of 12 dine separately from the older royals.

Also, before the March of the Middletons, non-royalty were shunned from royal Christmases. Princess Diana was never allowed to celebrate the holiday with the Spencers, but Kate Middleton has taken on Queen Elizabeth and won her way thanks to getting Prince William to cave.

Kate was smart enough to bend to the Queen’s will in 2011; obeying every royal tradition, but spent the next Christmas with the Middleton family in Berkshire. Why? Kate was pregnant with Prince George and the pregnancy of Prince William’s heir gave her power.

The following year, the royal couple attended church, but spent the rest of the day in with the Middletons. In fact, breaking royal standards, the Middleton family was a large part of the royal Christmas.

The entire family attended royal events on Christmas Eve including James Middleton joining Prince Harry’s team for a game of soccer. The Middletons even joined in on Prince Phillip’s annual shoot to attempt to bag a pheasant.

Before Kate Middleton, with the help of Carole Middleton, all of the non-royal involvement would have been unheard of.

This year, with the birth of Princess Charlotte, the Duchess has even more power. You can wager that Christmas Eve will be at Sandringham, playing nice with Queen Elizabeth, but the Middletons will once again be involved.

Prince William, Kate Middleton, Prince George, and Princess Charlotte will also attend the church service – again with the Middletons in tow – before skipping the rest of the Queen’s traditional plans to host a middle-class Christmas at Anmer Hall with the Middleton family.

What do you think of Kate Middleton overruling Queen Elizabeth? Will the Queen allow the Middleton family to take over Christmas celebrations again? Let us know your thoughts in the comment section below and keep checking CDL for the FIRST reports on Kate Middleton, Prince William, Queen Elizabeth, and all the royals!