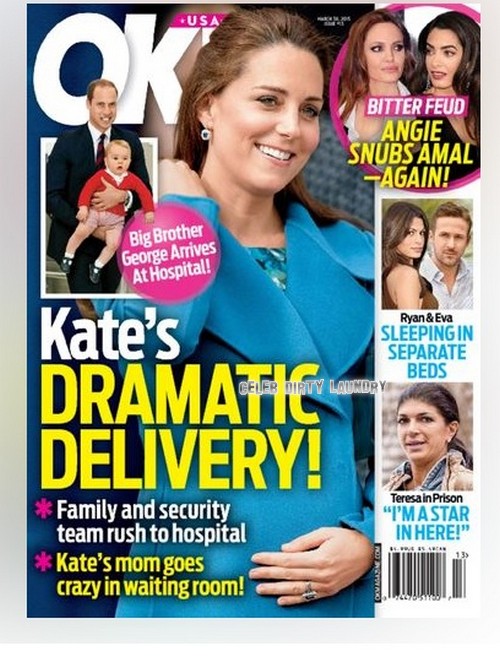 A new report states Kate Middleton is in labor and giving birth to a new baby! Of course this ridiculous OK! Magazine report fails to take into account that The Duchess of Cambridge is not in labor nor giving birth now.

Prince William’s wife Kate Middleton may be eight months pregnant, but the Duchess of Cambridge isn’t letting her growing baby bump get in the way of her royal duties. On March 18 Kate kicked off her busy day of appearances with a visit to the Brookhill Children’s Center In Woolwich, while visiting with the volunteers there she revealed that her baby girl’s due date is “the mid to end of April.” Ironically, the March 30th edition of OK! Magazine hit newsstands today with a horribly inaccurate cover claiming that Kate Middleton is already giving birth to her baby.

This week’s cover of OK! Magazine features a photo of Kate Middleton with her baby bump on full display and the headlines blares, “Kate’s Dramatic Delivery! Family And Security Team Rush To Hospital, Kate’s Mom Goes Crazy In Waiting Room.” Considering the fact that at this very second Kate Middleton is smiling for photo ops at an organization called Home-Start and meeting with volunteers and she still looks very pregnant – it is safe to say that OK! Magazine’s cover is a complete farce. Although it was a nice touch adding that Carole Middleton is “going crazy in the waiting room,” because that is totally believable.

Kate Middleton has had a busy week, and the Duchess of Cambridge has had back to back public appearances scheduled, including a St. Patrick’s Day Parade. If Prince William’s pregnant wife was even close to ready to give birth to George’s little sister, the Royal Family would not have her out and about parading around her baby bump. As excited as we are for the newest edition to the Royal Family, we’re not going to get too worked up until her actual due date arrives, which has been rumored to be April 20th, and was confirmed by Kate Middleton at the Brookhill Children’s Center in Woolwich when she stated “mid to end of April.”