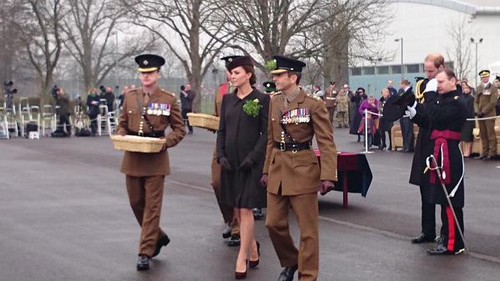 Kate Middleton and her baby girl baby bump made one of her final official public appearances before her due date at a St Patrick’s Day Parade. The Duchess of Cambridge attended the St. Patrick’s Day parade held in Aldershot, England. Prince William was by her side looking handsome in full uniform as Colonel of the Regiment. Kate Middleton opted to skip a traditional green frock and wore a Catherine Walker coat, accented by a Lock & Co. hat.

The couple participated in the parade, smiling throughout their visit to Mons Barracks. However, Kate was caught giggling and pinching her nose as soldiers standing around her for a picture burst into laughter. It would seems as someone broke wind near the future Queen, but the Mirror explains it was a simple joke one of the guardsmen made after a photographer repeatedly asked for “one more photo.” 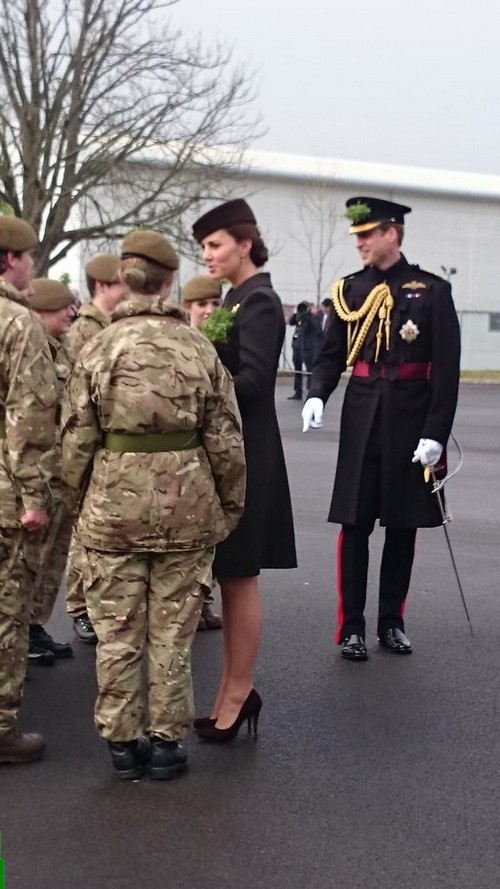 The St. Patrick’s Day Parade marks one of Kate Middleton’s last public appearance before her due date. She will be attending a few more engagements, which includes spending time a children’s center tomorrow, Wednesday March 18. After the final string of appearances, the Duchess will enjoy a well-deserved break from an exhausting schedule.

The second child of the Duke and Duchess of Cambridge is due in April. The exact date hasn’t been confirmed, but many media outlets believe that we can get clues based on the official announcement of Kate Middleton’s second pregnancy…

Kensington Palace made the confirmation of Kate’s first pregnancy on October 22. On September 8 of 2014, the royals released the news Prince George would have a baby brother or sister. Assuming she was a the 12-week stage at the release of both statements, it would put Kate Middleton’s due date as late April, the Mirror suggests April 20 as day she will reach full term. Being that Kate is still doing public appearances into mid-March, it’s a good bet that Middleton will not give birth in early April.

The gender of the Prince William and Kate Middleton’s second child is also being kept a secret. CDL has told you for months that Kate is pregnant with a baby girl. Both William and Kate have stated they do not know if baby number 2 is a boy or girl, but rumors from The Independent claim the Duchess was spotted buying pink baby clothes while shopping at children’s boutique, Amaia. One of the store’s owner revealed, “She was looking at all the girls’ clothing. She was very interested.”

It looks like royal fans won’t have long to wait. The Prince William and Kate Middleton’s baby girl…or boy…is due in just a few weeks!