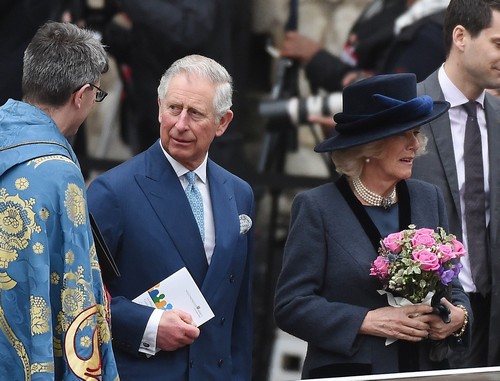 Prince William’s pregnant wife Kate Middleton is caught up in a nasty feud with her father-in-law Prince Charles and his wife Camilla Parker-Bowles. It’s no secret that Prince Charles despises commoners – including Kate Middleton’s family, and he is fed up with them playing such an integral role in his grandson Prince George’s life. Prince Charles wants baby George to be raised as royalty, not as a commoner. But, according to new reports – it is actually Camilla Parker-Bowles, who tells Charles Kate is lazy, who is encouraging the feud and egging on her whipped husband to lash out at Kate over Carole and the other Middletons.

The March 30th edition of GLOBE Magazine reveals, “During a joint appearance at Westminster Abbey for an event commemorating the British Commonwealth, Charles coldly turned his back on his son William’s wife after accusing her family of deliberately keeping him away from his grandson, George. But, Palace sources say Charles’ cunning second wife is the REAL reason for the Prince’s ruffled feathers.” GLOBE goes on to explain that Camilla Parker-Bowles has been “stirring the pot,” and has Prince Charles convinced that Kate’s mother Carole is taking over his grandchild’s life – and when Kate and Will’s baby girl is born in April 2015, he will probably see that child even less.

According to GLOBE’s inside sources, the Middleton Family has nothing against Prince Charles, if they are intentionally derailing baby George’s relationship with his royal grandparents – it is actually because of Camilla Parker-Bowles. Although Prince Charles has been whining to anyone that will listen that the Carole Middleton never lets him spend any time with Prince George, it is actually because they don’t want his crazy wife around the baby. GLOBE’s source explained, “I wouldn’t be surprised if there was some truth behind his paranoia. Carole must be aware of the Duchess of Cornwall’s notorious boozing and sharp tongue, which is hardly appropriate for a young child to be around.”

So basically, Camilla Parker-Bowles has Prince Charles convinced that Carole Middleton is turning baby George in to a commoner and is encouraging the feud between him and Kate Middleton – but in actuality the real reason the Middletons don’t want Prince George around his grandfather is because they don’t want him around Camilla Parker-Bowles. Do you think that the Middleton family is wrong to cut George out of Charles and Camilla’s life? Is it really because of Camilla, or are they just being greedy and don’t want to share George? Let us know what you think in the comments below!