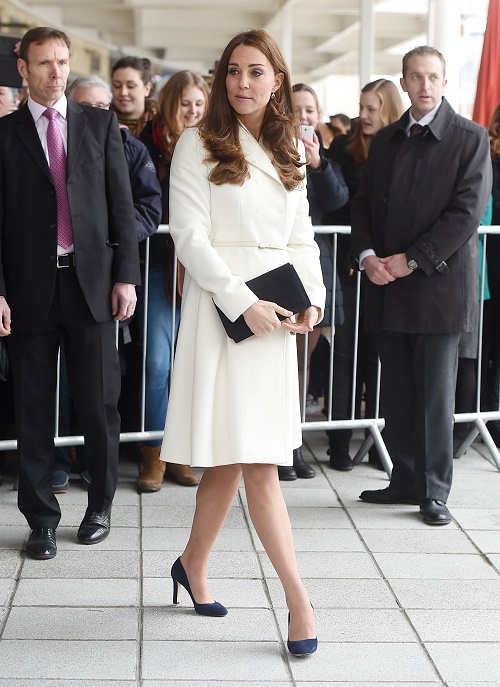 Prince William’s pregnant wife, Kate Middleton, is set to give birth to their second child in April 2015, less than two months away! The mother-to-be has apparently decided that she will be giving birth to this Royal heir in the comfort of her own home. Kate Middleton and Queen Elizabeth have never seen eye to eye on Kate’s parenting techniques when it comes to Baby George – but the Duchess of Cambridge and Prince William’s grandmother are already embroiled in a huge fight over her second baby…and Kate hasn’t even given birth yet!

Pregnant Kate Middleton is determined to have her and Will’s second child in a home-birthing suite. But, according to a new report from National Enquirer, Queen Elizabeth has put the brakes on Kate’s plans and ordered her to have the baby in a hospital under expert medical care. The magazine reveals, “The Duchess of Cambridge was determined to break with tradition and deliver her first daughter in a maternity unit set up in the family apartment in Kensington Palace. She consulted medical experts and they drew up plans to install all the equipment in a room close to William and Kate’s master bedroom. But they didn’t anticipate the Queen’s reaction.”

When Queen Elizabeth learned that Kate Middleton was planning a home birth – she announced that it was not an option. There was no swaying the 88-year-old monarch. She ordered Kate Middleton to have her daughter in the hospital to eliminate any health scares the infant heir could face. Prince William reportedly pleaded with his grandmother to let Kate Middleton give birth to their baby the way she wanted to, but his pleas fell on deaf ears. It is probably time that Kate Middleton just accepted the fact that she isn’t raising babies, she is raising heirs of the Royal Family and when she signed on to marry Prince William she basically signed off any parenting rights that she thought she had.