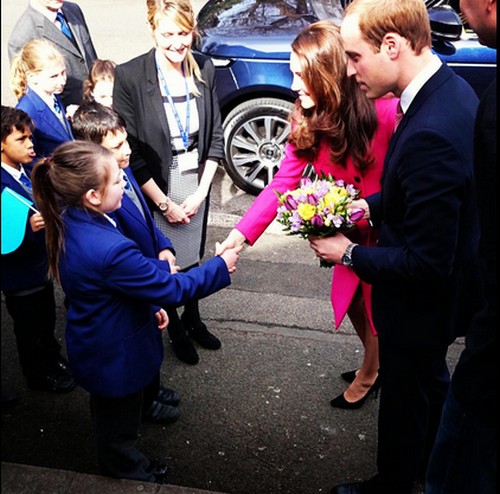 Kate Middleton made her final public appearance before her due date when she is expected to give birth to her second child, a baby girl – showing a large baby bump and wearing a pink coat. The Duchess of Cambridge smiled and looked radiant. More royal buzz speculates the couple has narrowed the possible royal baby girl’s name down to four names.

Kate Middleton’s spring due date is quickly approaching. The Duchess of Cambridge will give birth in the next few weeks; due mid-to-end of April. Prince William is at Middleton’s side as the royal couple prepare to make their final public appearances. Kate, wearing a gorgeous pink Mulberry coat, and William started in South London, meeting the mother of Stephen Lawrence, a teen who was murdered in a racially fueled attack.

Prince William looked cool and calm, with Kate showing no signs of distress despite rumors she had went into premature labor. Life & Style and OK! Both reported Kate Middleton gave birth to a baby girl. The story stated that Kate and William banned several members of the royal family from the hospital after a huge “blowup” sent Middleton into labor. The inaccurate report continued with a rumor Kate Middleton had a last minute, emergency cesarean.

Obviously all of this speculation was completely wrong. Kate has not yet given birth. In fact, the Duchess is busy with a packed schedule that followed her meeting at the Stephen Lawrence Centre with an appearance at a church to watch a presentation by XLP charity. William and Kate finished the day with a public appearance at Hazel Grove Estate in Sydenham.

As the Duchess of Cambridge makes her final appearances before giving birth, bookies are upping the ante on bets regarding the second child of Kate Middleton and Prince William. Odds are being slashed as bookies claiming “inside information” fuel bets. Most are banking on the royal couple welcoming a baby girl. Kate has claimed they do not know the sex of the baby, but Middleton was spotted buying little girl clothes at a boutique in London. Perhaps she is hoping and preparing for a princess, but it the baby’s gender has not been officially confirmed.

Bets on the name have been narrowed down to four choices. Elizabeth, Charlotte, and Victoria are all in contention for the name of Kate and William’s baby girl, but according to the U.K.-based Betfair, Kate Middleton and Prince William’s second royal baby’s name will be Alice.

All the names are traditional royal names. However, Queen Victoria was the last to use the name for her second daughter, Princess Alice. Elizabeth was the previous front runner in the royal couple baby name bets. Don’t rule out a boy! Another Prince for the Duke and Duchess isn’t out of the question. If Kate Middleton gives birth to a second boy, the most popular names are Richard, James, or Arthur.

What do you think of the possible royal baby names? Do you think Kate and William really know that the baby’s gender is female?