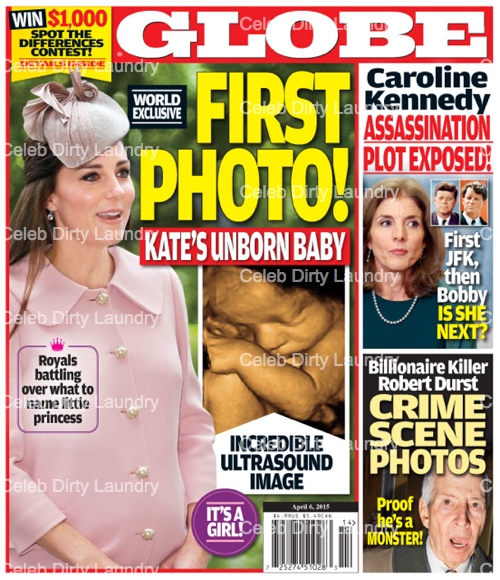 Prince William’s pregnant wife Kate Middleton is set to give birth to their new daughter in less than a month. The Duchess of Cambridge recently confirmed that her due date, which has been rumored to be April 20, is indeed in the “middle to end of April.” If you are dying to know what the future Princess will look like, then you have to pick up the April 6th edition of GLOBE Magazine. Our friends at GLOBE always get the inside scoop on the Royal Family, and this week they have exclusive 3D ultrasound photos of Prince William and Kate Middleton’s unborn baby girl!

The April 6th cover of GLOBE Magazine features a photo of pregnant Kate Middleton, and a sneak peek of the 3D ultrasound photo which shows her daughter’s face crystal clearly. The headline reads, “World Exclusive: First Photo! Kate’s Unborn Baby’s Incredible Ultrasound Image. It’s A Girl!” The exciting new GLOBE cover also goes on to tease that the Royal Family is battling over what name Kate Middleton and Prince William should choose for the young Princess. Rumors have been floating around for months now that the couple wants to honor William’s mother, and name their daughter Diana – however Queen Elizabeth is not allowing it. SO, they will most likely go with something traditional like Elizabeth (after the Queen) or Margaret (after the Queen’s late sister).

And in other news, The April 6th cover of GLOBE Magazine also features an intriguing story on Caroline Kennedy and teases, “Assassination Plot Exposed! First JFK, Then Bobby, Is She Next?” Also, this week’s edition of GLOBE features “Billionaire Robert Durst Crime Scene Photos” and “Proof that he is a monster.”

So, are you as excited as we are for Kate Middleton’s due date? Do you think their daughter looks more like Prince William or Kate? As soon as GLOBE hits the newsstands we will be rushing out to get a copy so that we can dish all the details on the newest addition to the Royal Family! What do you think they will name the new Princess? Let us know what you think in the comments below!