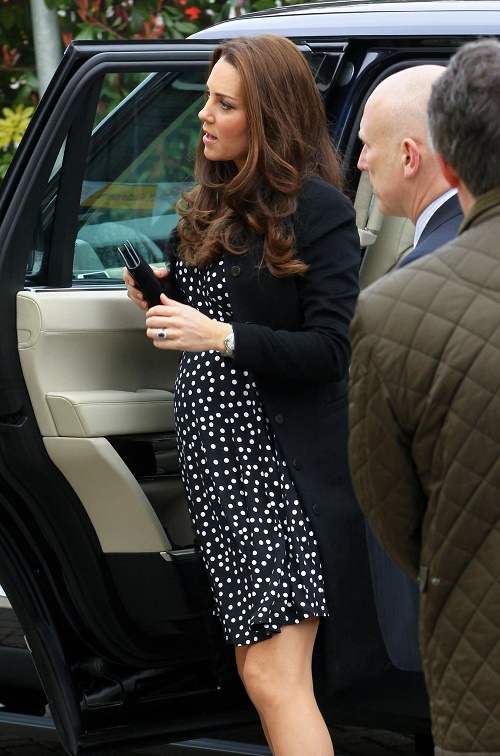 Prince William’s wife Kate Middleton is 8 months pregnant, but she is not letting her baby bump get in the way of public appearances. According to a new report, Kate Middleton has events planned up until March 27th, and then she will disappear from the public eye until after she gives birth to Prince George’s baby sister. Despite false reports that Kate Middleton is already having contractions and going into labor at any moment, the Duchess of Cambridge confirmed on March 18th that she is not due until (mid to end of April).

According to a new report from NBC News, Kate Middleton’s final hurrah on March 27th before she gives birth to Prince William’s second baby will be packed full of Royal duties. Prince William will be accompanying Kate Middleton as the expectant couple kicks off their day with a tour of the Stephen Lawrence Centre. After their tour of the community center, the Royal couple will meet up with XLP Charity at Christ Church – while they are there they will meet with some of the volunteers and enjoy an Art Showcase. Kate Middleton will round out her eventful day on March 27th with a trip to the Hazel Grove Estate, there she and Prince William will meet with youngsters who have been helped by XLP Charity and check out a mobile recording studio.

Kate Middleton will only have about two weeks before her baby’s due date when she and Prince William head out on March 27th for a heavily scheduled day of appearances – hopefully the pregnant Duchess will be able to keep up. There is always the chance that Kate could go into labor before March 27th, but if there was any concern of that or reason to believe she could give birth early, the Royal Family would have her on strict bed-rest and not out running around.