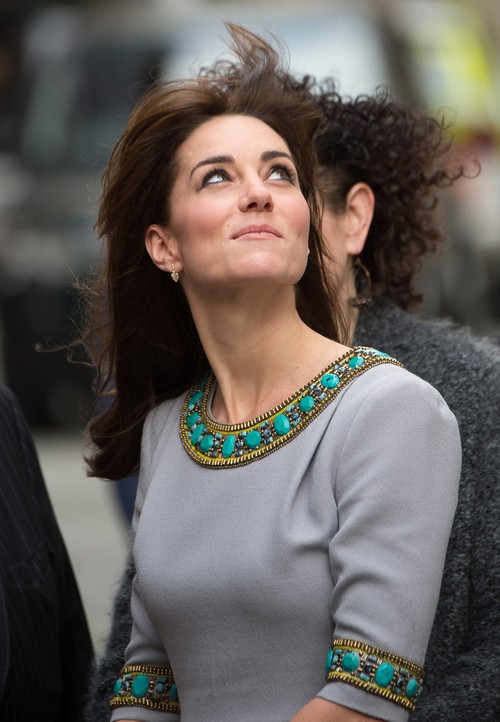 Kate Middleton has ignored Kim Kardashian’s birth of her son, Saint West. The royal snub for Kimye likely has the couple irked with the Duke and Duchess of Cambridge as if the royals care!

For some reason, Kim Kardashian and Kanye West have equated themselves as the American version of royalty. Kim has reportedly been obsessed with being viewed as an equal to Kate Middleton. It began when The Keeping Up with The Kardashian star wanted to have the same fairytale wedding and attention Kate had when marrying Prince William.

The Duchess of Cambridge is adored by most, and commands a respect while having an appeal that results in every piece of clothing Kate wears to sell out in minutes. Of course Kim Kardashian wants to be best friends with Princess Kate.

However, the Duchess is keeping her distance and was rumored to have returned the baby gifts Kim sent her after the birth of Prince George.

Nasty feud or not, Kate Middleton wouldn’t be allowed to associate with the Kardashians even if she wanted to. Kate is the Duchess of Cambridge and, while she is successfully orchestrating a royal revolution that is breaking royal protocol in favor middle-class family values, Queen Elizabeth would have Kate beheaded for associating with Kim Kardashian and Kanye West.

Maybe that is why Kim and Kate are paired together in tabloid fodder. Despite incorrect reports that Prince William and Kate Middleton sent Kimye congratulatory messages after the birth of their son, Saint West, the royals have ignored the birth of Kim and Kayne’s baby boy Saint West, naturally.

Could you imagine what Queen Elizabeth and Prince Charles would do if Kate Middleton associated with a sex tape star and the guy who got drunk at the MTV Music Video Awards and made Taylor Swift cry? It’s laughable to even think Kate would lower herself to such a level.

In fact, in a previous report shared by CDL, Camilla Parker-Bowles reportedly had a fight with the Duchess of Cambridge and compared Kate with the “trashy” Kardashians. The last thing Kate Middleton would do is reach out to Kim Kardashian on any level.

What do you think of Kate Middleton ignoring the birth of Kim Kardashian’s son, Saint West? Have the royals snubbed Kimye or do you believe Kate and Prince William would reach out to Kim and Kanye West? Let us know what you think in the comment section below and make sure bookmark CDL for all your royal news.