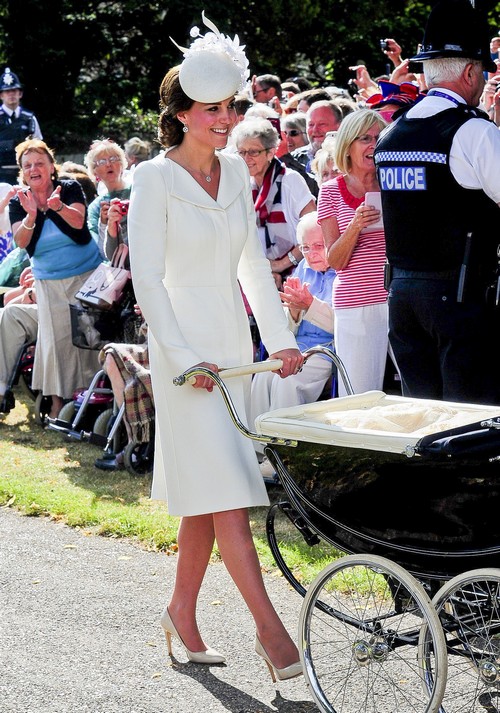 Kate Middleton is one classy woman often described as quite “normal,” but maybe the term ballsy might be more appropriate. According to palace aides after Princess Charlotte’s christening Sunday July 5, the Duchess of Cambridge refuses to attend any more official royal engagements for the rest of the summer. Is Queen Elizabeth planning on retaking control from the Middleton family after Kate puts her foot down?

Rumors that Kate was determined to enjoy a longer maternity leave have been brewing since the weeks leading up Princess Charlotte’s birth. People reported a few pals revealed Kate “felt she came back too soon last time. She wants to have that [family] and enjoy it with George and the new baby.” The Duchess returned to making official appearances just a month after giving birth to Prince George, attending the Ring of Fire race in Anglesey, Wales.

Kate was rumored to be wavering on attending Queen Elizabeth’s birthday parade, according to various media outlets. However, the Duchess of Cambridge attended Trooping the Color, even sharing a carriage with Camilla Parker-Bowles. Perhaps that was Kate’s peace offering, as Vanity Fair reports Kate will not take on any official engagements for the rest of the summer. Translation – it Kate Middleton doesn’t want to go to an event, she won’t be attending.

Prince William and Kate are due to attend Wimbledon, enjoying the match from the Royal Box. Both the Duke and Duchess have a passion for tennis, recently making plans to move and refurbish the tennis court at Anmer Hall. Prince William will go on to attend official engagements; meeting with families who suffered a loss during London 7/7 attacks on Tuesday, be on hand at the Imperial War Museum to welcome a refurbished Supermarine Spitfire on the museum’s behalf Thursday, and join Queen Elizabeth to watch the RAF flypast marking the 75th anniversary of the Battle of Britain on Friday.

How far will Queen Elizabeth let Kate Middleton push her? It’s clear the Middleton middle-class march is continuing, but it’s a safe bet the Queen is probably already planning to regroup and retake control the Middleton family. Anmer Hall has become Kate and William’s haven, where Carole Middleton has inserted herself as de facto monarch. If Kate attends more official engagements, it might be a sign she is bending to the will of the Queen.

We will certainly be keeping an eye on the royals. What do you think of the Middleton family’s middle class influence on royal protocol? Will Queen Elizabeth put a stop to it or has she given in, admitted defeat to Carole Middleton’s determination to control Kate Middleton and the royal heirs, including of course Prince Willian to a great extent? Let us know in the comments below.