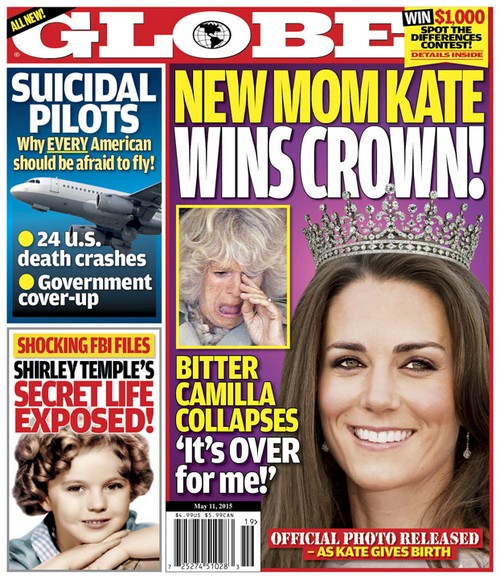 Kate Middleton will be named the next Queen of England! Prince William’s wife Kate Middleton has her hands full with the birth of her baby girl, Prince George, and becoming the next Queen of England. The Duchess of Cambrige was rushed to St. Mary’s Lindo Wing this weekend to give birth to her daughter, but according to a new report just hours before the Duchess of Cambridge went in to labor – she learned that she was being named the next Queen of England. It’s no secret that Queen Elizabeth has been working tirelessly to have the Monarchy bypass Prince Charles and his second wife Camilla Parker-Bowles, and she has finally succeeded.

Now that the royal baby has been named Charlotte Elizabeth Diana, Camilla has gone off her rocker entirely and is not expected to regain her composure any time soon! Imagine the double thrust of revenge that Kate Middleton and Prince William have managed with this clever name selection! Not only is Camilla Parker-Bowles arch rival Princess Diana forever memorialised but Charlotte happens to commoner Pippa Middleton’s middle name! Word is that Camilla considers the royal naming, Her Royal Highness, Charlotte Elizabeth Diana of Cambridge, to be a vicious slap in the face and is considering how she will get even.

The May 11 edition of GLOBE Magazine reveals, “As the days ticked down to the birth of her second royal baby, Prince William’s beautiful wife Kate got a thrilling gift – the news that she will be the next Queen of England.” The magazine reported earlier this year that Prince William had told Queen Elizabeth that he didn’t think his wife Kate would be up to the task, with two babies to care for, but he apparently had a change of heart after the Queen persuaded him. GLOBE explains, “Elizabeth dropped the bombshell that she had been so close to Kate that she was convinced his wife was willing and strong enough to carry on the role.”

Prince William rushed home and shared the joyous news to a thrilled and pregnant Kate that she would be the next Queen of England, Camilla Parker-Bowles didn’t take the news so well though. According to GLOBE Magazine’s insiders, “For her arch rival Camilla it was like a dagger being driven in to her back – triggering a dramatic collapse in her London residence, Clarence House. She had to be helped to her bed by servants. The Duchess of Cornwall looked shell-shocked, almost as if she had lost her will to live.”

It has been obvious since day one that Queen Elizabeth has been grooming Kate Middleton to take her throne – the last two people on earth she trusted with the Monarchy are Prince Charles and his second-wife Camilla Parker-Bowles. Now that Camilla Parker-Bowles knows that she will never wear the Queen’s crown, it will only be a matter of time before she proceeds with her divorce from Prince Charles and tries to take the royal family for every penny they are worth.

What do you think of Kate Middleton becoming the next Queen of England? Will she be able to handle the pressures of raising two children and being Queen to King William? Let us know what you think in the comments below!