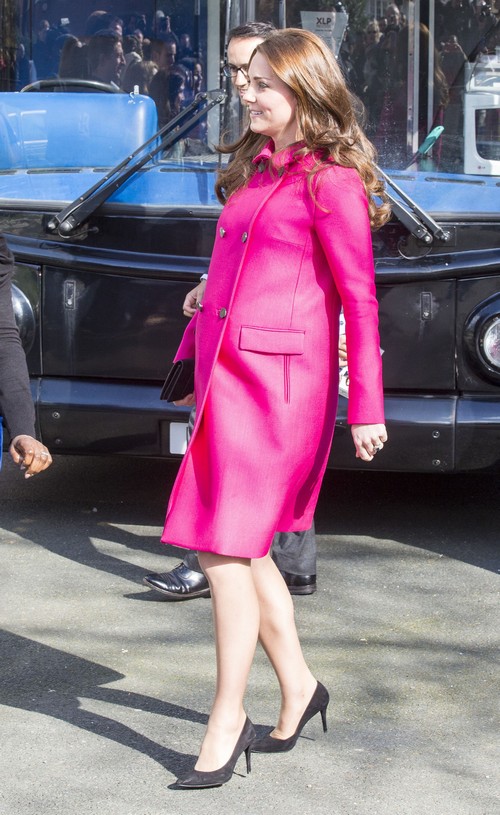 Kate Middleton is planning a strict weight-loss diet and cosmetic surgery to get her post-baby body back into the A-list shape in which she likes to keep it. Kate Middleton is due to give birth any day now, and we’ve covered every detail on all the delivery plans, baby’s gender, and even the new Princess or Prince’s names. The Duchess of Cambridge’s due date arrives on April 25, and Kate Middleton is making sure everything is in place, including her plans for a strict diet to lose weight and return to her post-baby body after indulging in sweets during her pregnancy. Just how far will The Duchess go? Maybe cosmetic surgery?

Princess Kate is convinced she is having a girl thanks to an old wives tale regarding cravings for desserts and sugary snacks. The Duchess confessed she “couldn’t stop scoffing sweets” after her severe morning sickness subsided. Kate couldn’t get enough chocolate biscuit cakes and sticky fruit loaves according to the sources who shared the details.

All those caloric treats might have The Duchess worried she won’t bounce back to her post-baby body like she did after giving birth to Prince George. Princess Kate isn’t obsessed with her weight, but she did take her pre-wedding diet very seriously, and lost too much weight according to some. Kate Middleton allegedly used the Dukan Diet before marrying Prince William in 2011, but the founder of the diet, Pierre Dukan, thinks she “lost too much” weight before the ceremony.

Princess Kate is also said to have continued the diet during her first pregnancy and used it to lose the weight after giving birth to Prince George. The high-protein, low-carb plan is similar to the paleo diet that became popular after Dukan’s Diet. Some nutritionists are wary of the regimen, as it cuts nutrient-packed foods like vegetables and fruits for four to six days during the “Attack” phase, which repeats itself throughout the plan.

The Duchess also used fruit smoothies during her allotted “cheat” time post-delivery of baby George. Kate loved to snack on muesli bars, walk daily, doing yoga, and spending time with personal trainers to regain her post-baby body. CDL has covered tummy tuck possibilities before, but a second pregnancy coupled with the stress of dealing with royal drama, scandals, and making The Queen happy might tempt Princess Kate to undergo some cosmetic surgery to freshen herself after giving birth to Prince William’s second child.

It has been noted that The Duchess of Cambridge is supposedly planning on taking more time after delivering the new Prince or Princess. Friends of the royal say Kate Middleton wants to take a longer maternity leave and enjoy her growing family. Perhaps this could also mean she might need more recovery time for a small nip and tuck?

Kate Middleton is gorgeous, and a natural beauty without any need for plastic surgery, but it’s easy to empathize with the pressure and stress she might be feeling. The Duchess seemingly handles everything with grace, but constantly being in the public eye may be a temptation to indulge in some cosmetic procedures. If that what makes her happy – then it’s completely understandable.

Photos of the way Kate Middleton prefers to look! FameFlynet