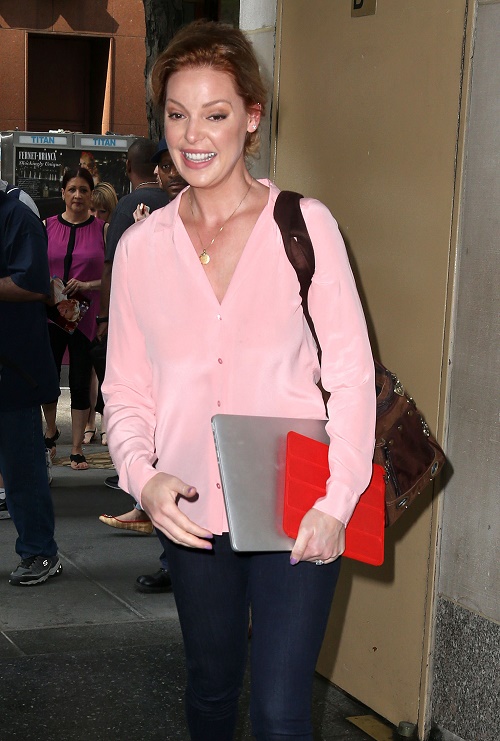 Is Katherine Heigl ever returning to the ABC primetime drama Grey’s Anatomy? Izzie Stevens fans probably shouldn’t hold their breath if they were waiting for Heigl’s big comeback. Katherine played the part of the popular character Izzy on Grey’s Anatomy from 2005-2010, and her exit was surrounded with controversy and she was supposedly caught up in a feud with show creator Shonda Rhimes.

A few years ago, rumors began floating around that Katherine was planning on returning to Grey’s Anatomy, and Katherine teased in an interview that she would love to see where her former character Dr. Izzie Stevens was at in her life now. Despite leaving on bad terms, Heigl seemed optimistic about making a return, even if just briefly. After Patrick Dempsey’s controversial exit from Grey’s this year, there was an obvious void in the cast – and rumors of Katherine’s return continued to gain momentum.

Katherine Heigl sat down for an interview with Entertainment Tonight this week, and they asked the actress if there was any truth to the rumors that she was returning to the cast of Grey’s. Heigl curtly responded, “There is not.” So what caused Katherine’s sudden change of heart? Not that long ago she was gushing that she wanted to return to Grey’s and update her fans on her character Dr. Izzie Stevens. Now, she won’t even entertain the idea.

According to a report from Naughty Gossip, Katherine Heigl apparently begged Shonda Rhimes to let her return to Grey’s, and Shonda was not having it! Naughty Gossip’s inside source dished, “Shonda flat-out refused to let Katherine even contact a writer on staff. She doesn’t want someone to be written into her show if she can’t appreciate working there and using the platform for good.”

Shonda Rhimes sure knows how to hold a grudge! Are you disappointed Katherine won’t be returning to Grey’s? Do you think Shonda is being petty, or did Heigl blow it with the queen of primetime drama? Let us know what you think in the comments below!