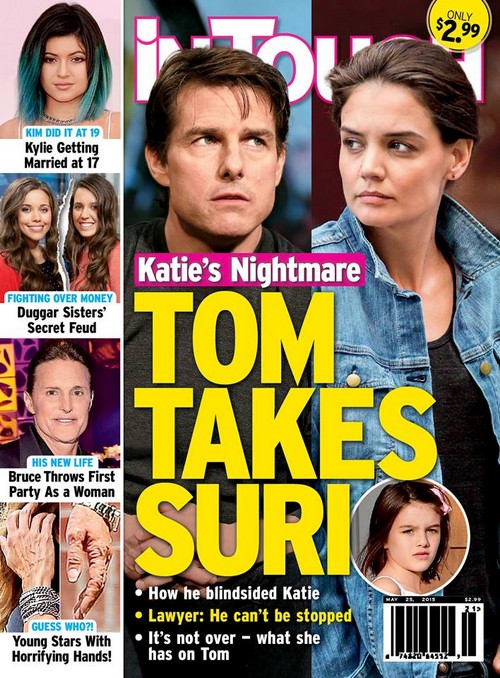 Katie Holmes fears Tom Cruise will take his daughter Suri Cruise – and will have no intention of giving her back! Tom Cruise hasn’t seen his daughter in months, some sources even say a year, but the May 25 cover of In Touch Magazine claim that Suri is now with her dad and he is not letting Katie Holmes have her back. Brace yourself folks – we are in for one of the messiest celebrity custody battles we will see in this decade.

The May 25 cover of In Touch Magazine features a photo of a very unhappy looking Katie Holmes, and the headline screams, “Katie’s Nightmare: Tom Takes Suri.” The magazine goes on to tease that they have inside information and all of the juicy details of how “Tom blindsided Katie.” Apparently Tom thinks that he “can’t be stopped,” but Katie Holmes has some dirt on her ex-husband and she plans to use it if he doesn’t hand back over their daughter. Who wants to bet that this custody battle somehow winds up being linked to Scientology? Either Tom’s religion steps in and tries to help him win the custody battle or perhaps Katie will use Scientology against Tom in order to get her daughter back.

In other celebrity news, it’s a busy week for reality TV stars. The all new cover of In Touch Magazine reveals that Kylie Jenner is planning on getting married to Tyga, even though she is just 17 years old. It’s perfectly okay though because her big sister Kim Kardashian got married when she was a teenager too – and you know that marriage was totally successful. TLC’s royal family the Duggars appear to be the least shallow people on television but behind closed doors the Duggar sisters Jessa and Jill are fighting tooth and nail over money. And, on a brighter note – Bruce Jenner threw his first official party as a woman, according to In Touch.

So, who do you think will win the custody battle over Suri Cruise – Tom or Katie? Isn’t it bizarre that Tom didn’t see his daughter for months, and now all of a sudden he wants to be super dad and raise her full time? Or is the reason Tom wasn’t around because Katie wouldn’t let him see Suri? Let us know what you think in the comments below!