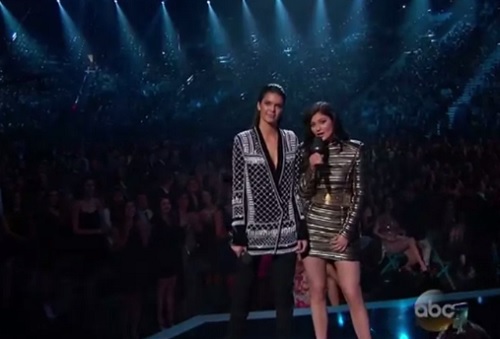 Kendall Jenner and Kylie Jenner were met with deafening boos from the crowds at the 2015 Billboard Music Awards. At least the VIP celebs in the front row had a modicum of decorum; celebs are taught to keep their inner-Schadenfreude hidden behind stoic half-laughs. To put it lightly, the Kardashian/Jenner/West family had a rough time at the Billboard Music Awards last night. Kylie and Kendall Jenner were heckled when they introduced Kanye West, whose performance was censored (bleeped) for a full minute. It was an awkward massacre.

Kanye arrived at the show with his usual fireworks, swearing, and Kanyeisms. The censors were all like, “What the… Press the damn buttons!” So they pushed the buttons and bleeped the Taylor Swift hater into oblivion. Producers scurried around like walking nervous breakdowns; Kendall and Kylie cried on the walls backstage; Kris Jenner screamed; and Kanye simply continued performing, completely oblivious to the fact that not a single person in the entire world heard his live performance.

Needless to say, Kanye’s noli-me-tangere personality made grown men cry post-performance. According to an exclusive source for Celeb Dirty Laundry, “Kanye was furious when he found out about the performance. It wasn’t a happy sight. Kanye doesn’t appreciate censorship, as he believes ‘art shouldn’t be subjected to the conformist rules of society’.”

Kanye’s post-performance tristesse was either an outdated publicity stunt made famous by pop stars in the ‘90s, or it was a real, honest-to-goodness emotional experience. Although we’re leaning towards the latter, there’s still a tiny voice screaming in our ears, “Shock value! Shock value! Shock value!” Everyone likes water cooler talk on a Monday morning, and we all know by now that Kanye is an expert at creating secret water cooler meetings.
Redaction, detraction, reaction, satisfaction.

What did you think of his performance? Do you think Kanye West is an ‘artist’ or a slave to the music industry? Let us know your valuable thoughts in the comments below.