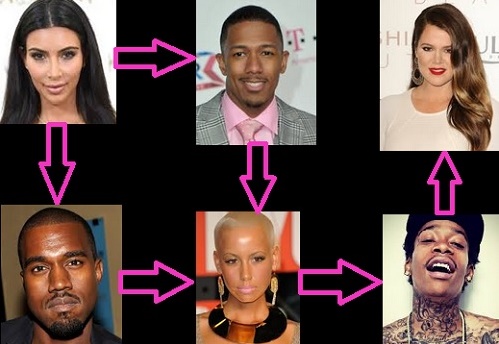 Khloe Kardashian has a new boyfriend, and now everything is beginning to make sense. According to inside sources, Khloe Kardashian has been hooking up with Amber Rose’s ex-husband, Wiz Khalifa. Aha! It’s no secret that there has been some bad blood between Amber Rose and the Kardashian sisters for years now, but we were all thrown for a loop last week when Amber and Khloe Kardashian got in to an epic feud on Twitter, because it was so out of character for Khloe.

The whole ordeal began when Amber Rose said Kylie Jenner was too young for Tyga during an interview. Really? Much more important people say much meaner things about Khloe and her sisters every day and Khloe just turns the other cheek, but for some reason she launched an all-out war on social media against the ex-stripper turned “model.” But, now it all makes sense. Khloe and Amber’s animosity really had nothing to do with Kylie and her love life – it’s all about Wiz Khalifa.

In 2014, when Amber Rose confirmed that she and Wiz Khalifa had broken up and were getting a divorce, Khloe Kardashian was spotted out at a restaurant with Wiz and instantly spurred rumors that she was the girl that Amber Rose blasted Wiz Khalifa for cheating with. However, neither Amber, Wiz, nor the Kardashians confirmed or denied the rumors. But, according to an inside source, “Khloe is still secretly sneaking around with Wiz, and Amber knows it – that’s why she is really mad. After Amber dissed Khloe and her sisters on Twitter, Wiz totally took their side by posting pictures of her dirty house online and slamming her parenting. The feud is far from over, it is only going to get worse. This is the second man that one of the Kardashians have stolen from her.”

So, now the Kardashians have officially turned Kanye West and Wiz Khalifa against Amber Rose, and they are clearly wrapped around the reality TV sisters’ fingers. What do you think about Khloe and Wiz hooking up? Are they not the strangest couple ever? Let us know what you think in the comments below!