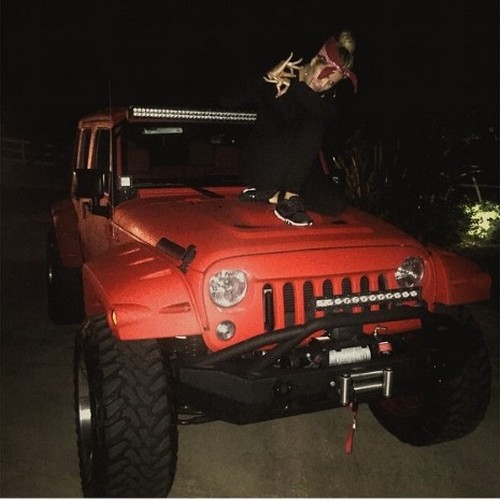 Watch out kids, Khloe Kardashian is super dangerous and apparently a gangbanger. The Keeping Up With The Kardashian’s pal rapper The Game posted a not-so-flattering photo of Khloe Kardashian posing on the hood of his truck rocking a red bandana and throwing up gang signs. Apparently, Khloe was “repping” the Los Angeles Bloods.

The Game, who was rumored to be dating Khloe Kardashian on more than one occasion, but insists that they are just friends captioned the photograph: Bickin’ it… off the red wine turns @KhloeKardashian into 2Pac lol…. she stole my rag…. Jumped on my jeep & said she not gettin down til I take her back to Compton…… (Hood facts: she used to drop me off in the hood after the studio everyday back in 05′) we always been 100 #WinnersCircle.”

Khloe Kardashian has been hanging out with a questionable crowd for months now, ever since her on-again and off-again relationship with rapper French Montana. This year a close friend of Khloe’s, Chinx Drugz, was shot and killed in a shooting in New York City. Then a few weeks later her boyfriend, or ex-boyfriend, French Montana’s music video set was raided by the police and multiple arrests were made for drug and gun possession.

According to Radar Online’s inside sources, Khloe Kardashian’s family is very concerned that she is falling in to a bad crowd. Here’s the thing – Khloe Kardashian is not a lost and confused 16 year old girl, she’s 30 years old. If she wants to climb around on the hood of cars and throw up gang signs or party with gun-toting drug dealers, then she is going to do just that. At this point we should all just be laughing at how ridiculous she looks with her super badass red bandana, not staging an intervention because she is “so lost” and hanging out with the “wrong crowd.”

What do you think of Khloe’s behavior? Is she in a gang, or just going through some sort of mid-life crisis? Let us know what you think in the comments below!