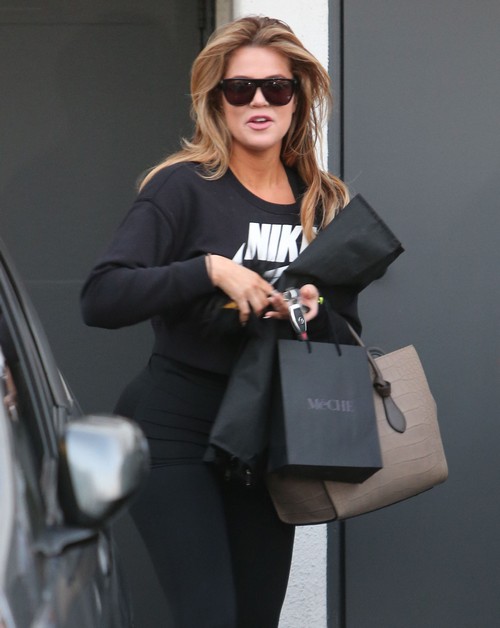 Khloe Kardashian clearly hasn’t learned from her disastrous stint on The X Factor, since recent reports suggest that she’s now trying for Kelly Osbourne’s spot on The Fashion Police. Kelly recently announced her departure from the show, which was a long time coming – she had previously expressed displeasure over the idea of staying on after Joan Rivers’ death, and she clearly couldn’t keep it together much longer. Of course, Khloe Kardashian reportedly thinks that she would be a fantastic replacement for Kelly, and is allegedly begging E! to let her give it a shot.

A source tells Naughty Gossip, “Khloe thinks that she had a great performance on the Oscars red carpet show, and she wants to replicate that as a regular cast member on Fashion Police. She has reached out to E! with interest and they are definitely considering her.”

Uh-huh. Again, has Khloe forgotten about her disastrous stint hosting The X Factor? She was fired for a reason, and she seems to have conveniently forgotten about that. Plus, The Fashion Police requires quicker wit and faster comebacks than The X Factor ever did, and Khloe couldn’t even handle that. She would be eaten alive on Fashion Police, both by her fellow anchors and the audience. She may know her fashion and she may know her celebrities, but her education is lacking, and she can barely read and write – how does she think she’s going to keep up with the others?

What do you guys think about Khloe Kardashian’s desire to be on The Fashion Police? Do you think E! will humor her and let her try it out for a bit – at least for the sake of ratings? Or will they be honest with her and tell her that she sucks at hosting, i.e. risk incurring her wrath? Let us know your thoughts in the comments below.