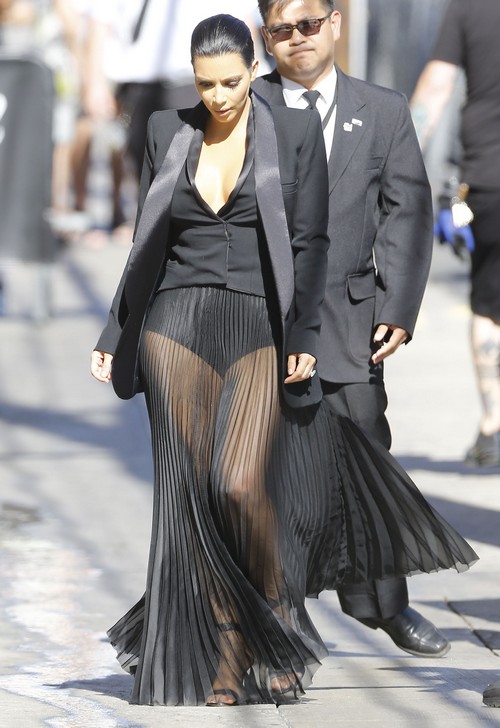 Kim Kardashian and Kanye West’s divorce is back on, but the reality TV star managed to find time to stop traffic and make a grand entrance at Jimmy Kimmel Live in a show-stopping outfit. In what most celebrities would consider red carpet attire, Kim Kardashian showed up for her appearance on Jimmy Kimmel Live in a long billowy sheer dress that left little to the imagination. Always the conservative one (that’s sarcasm), Kim barely covered up her breasts with a jacket that boasted an impressive plunging neckline. Seriously, how do her boobs not fall out? It’s safe to assume that Kim’s controlling and soon to be ex-husband, wanna-be fashion mogul Kanye West dressed her for the event. Wouldn’t you want to divorce your husband if he made you go outside every day with your underwear showing?

Kanye West and Kim Kardashian’s marriage has run its course – Kanye has always been controlling when it comes to the reality TV star and basically dresses her like a toy doll. After forcing his wife to bleach her hair on more than one occasion and wear ridiculous ensembles to events (like a sheer evening gown that shows off her Spanx), Kanye West finally crossed a line when he put Kim on a crazy diet and began counting her calories for her and forcing her to meet with dieticians and fitness trainers.

Kanye West and Kim Kardashian’s divorce has been a long-time coming because the couple couldn’t get pregnant with baby number two, no matter how many times a day they had sex – which according to Kim is about 12. Even though a doctor informed Kim and Kanye the odds of Kim getting pregnant with a second baby were slim to none, and if they were successful could be life-threatening, Kanye is now convinced that the reason Kim hasn’t popped out a son for him yet is because she isn’t healthy. So, he put Kim on a strict diet and monitors her exercise and eating daily. Seriously, is there any woman who wouldn’t divorce a man after that? Kim’s probably having her divorce attorneys sneak her in some Taco Bell as we speak.

So, what do you think of Kim’s ridiculous see-through dress that she wore just to walk in to the studio? Is it another result of Kanye’s keen fashion sense? Do you think that Kim Kardashian will actually go through with the divorce this time, or will she get cold feet again? Let us know what you think in the comments below!