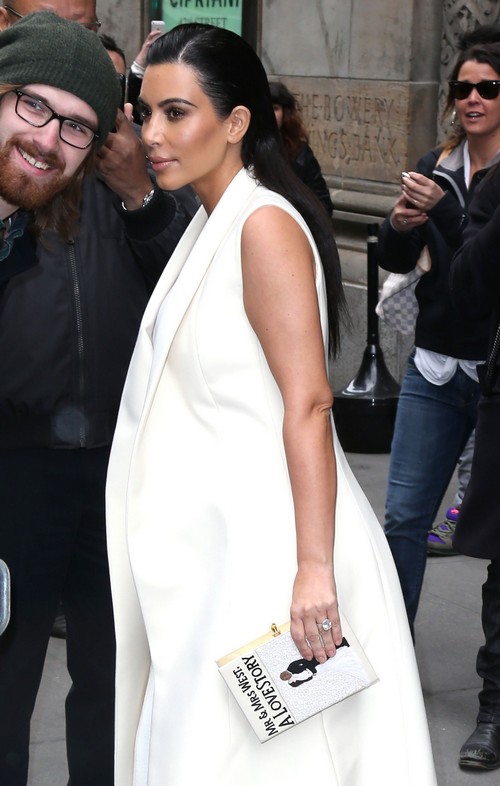 Kim Kardashian and Kanye West have been flirting with a divorce for months according to rumors – and at this stage who really could blame Kim for wanting to part-ways with her controlling husband? Despite Kim Kardashian’s famous fertility problems that could put her health at risk, Kimye wants another baby – they are great for business after all. Note that after the first year or so during which Kim and Kanye basically forgot about Ignori the couple finally figured out that North West is great PR. Seriously, how long could you stay married to Kanye West? It’s no secret that Kanye West wears the pants in their marriage, but his micro-managing and controlling ways have only gotten more extreme over the past few months – and the rapper has put his wife on a strict diet!

According to a new interview, Kanye West has finally crossed a line and put Kim Kardashian on a strict diet so that she can get pregnant again. And, if a husband counting his wife’s calories isn’t a ground for a divorce – then we’re not sure what is. Although in her interview Kim laughed off the diet and claimed that she and Kanye were “getting healthy together” and visiting a nutritionist, our sources say that there is much more to the story. Yes Kimye claim to want to get pregnant and have another baby but….

Kim Kardashian has been trying to get pregnant with baby number two for months now – and despite the fact that a doctor told her the reason she hasn’t been able to conceive is because of damage that was done to her uterus during her first pregnancy, Kanye West is convinced it is because of her weight gain.

An insider dished to CDL, “Kanye basically told Kim that the reason they don’t have their baby yet is because she has gained too much weight and needs to go on a healthy diet. Kim is already devastated over her fertility problems, and now Kanye is following her everywhere she goes like a tyrant and counting her calories and telling her what she can and can’t eat. She is truly fed up with him.”

Who wouldn’t want to divorce their husband if he put them on a diet and informed them they were too fat to get pregnant? Even Kim Kardashian doesn’t deserve that kind of treatment. What do you think of Kanye’s new radical plan to get Kim pregnant by starving her? Let us know in the comments below!

Variety’s Power Of Women New York Brought To You by Gevalia at Cipriani 42nd Street on April 24, 2015 in New York City

Kim Kardashian is seen leaving Bruce Jenner’s house in her silver Rolls Royce in Malibu, California on April 25, 2015. Bruce’s interview last night with Diane Sawyer, where he came out as a transgender woman, captivated audiences and had social media slammed with reactions.