Kim Kardashian Divorce From Kanye West Back On: Kimye Spotted At LAX Miserable And Fighting! 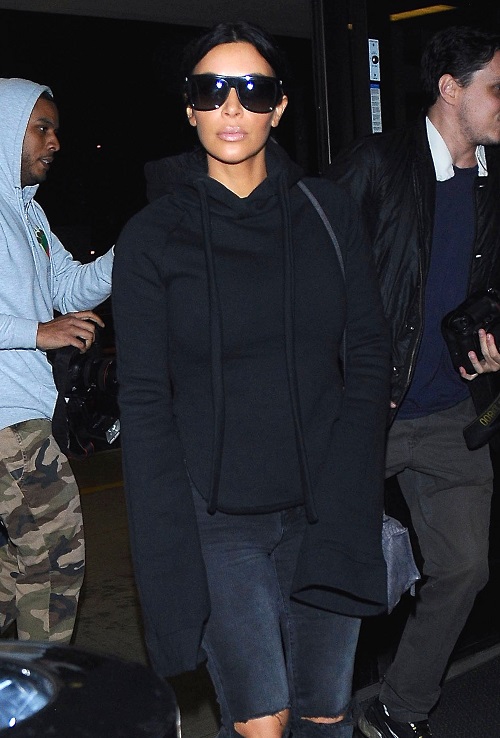 Kim Kardashian’s divorce from husband Kanye West is reportedly back on after the Keeping Up With The Kardashians star and her rapping hubby fought their way through Armenia and Europe – and were overheard having a screaming match in their hotel. Kimye arrived at LAX Airport on Tuesday, April 21 and they caught a flight to New York City where Kim has some events scheduled. Photos were snapped of the not-so-happy couple looking even more miserable than usual, and if it weren’t the squad of security guards and paparazzi following Kim Kardashian through the airport – no one would have recognized her.

Apparently, the divorce and fighting with Kanye West has taken a toll on Kim Kardashian, the Keeping Up With The Kardashians star was so emotionally drained that she headed to the airport dressed-down in a hoodie and jeans, sans make-up, and with huge glasses to try and cover her clearly unhappy face. Onlookers at the airport noted that Kim and Kanye rushed through security and completely ignored fans and the paps, the couple barely said two words to each other inside the airport.

Kim Kardashian’s divorce form Kanye West has been on and off for months, the couple can’t seem to agree on anything and their fertility woes and Kim’s struggle to get pregnant with baby number two have taken a toll on their marriage. Earlier in 2015 Kim met with high-profile divorce attorneys and was even spotted not wearing her wedding ring, while Kanye was in Paris the reality TV mogul was rumored to be shopping around an exclusive divorce story to the tabloids.

If Kim and Kanye are so unhappy together – why are they still together? It all comes down to cold hard cash, the couple has been building the Kimye brand and they know if they break-up their images will take a huge hit and they won’t be the center of attention anymore. On a scale of 1-10, how miserable does Kim look at the airport? DO you think the couple will make their divorce official soon? Or will they try to salvage Kimye? Let us know what you think in the comments below!