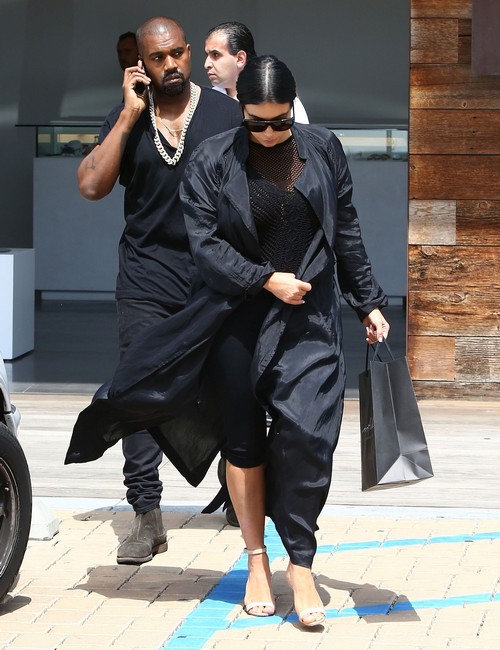 Kim Kardashian and Kanye West’s marriage is strained as it is, and they always seem to be a few steps away from a messy divorce. As if they didn’t have enough problems of their own to fight over, Kim’s sister Kourtney Kardashian and Scott Disick’s relationship woes seem to be casting a shadow on Kimye. The internet is still buzzing over Kourtney and Scott’s messy break-up as a result of another of the Lord’s cheating scandals. And, Kim and Kanye are picking up Scott and Kourtney’s slack.

Kim Kardashian decided to play sister of the year and step in and help Kourtney Kardashian during her time of need by taking care of her three kids. Kim volunteered to take Mason (Kourtney’s oldest son) to New York with her and Kanye and North West during 4th July weekend. Kourtney gladly pawned one Mason off on Kim and Kanye, but it turns out Kanye wasn’t thrilled about toting someone else’s kid around with him all weekend.

One of Kim and Kanye’s never-ending battles is over Kim’s family and their drama. Kanye doesn’t have the time nor patience to deal with their cheating, break-ups, gender transformations, or underage sex scandals – and he tries to distance himself from the madness. So, you can imagine how annoyed he was when Kim invited Mason to crash their vacation in NY because of Kourtney’s drama with cheating Scott Disick. And, Kim is pregnant and battling morning sickness, so when she volunteered to take Mason, she basically volunteered Kanye to watch him over the weekend.

An insider close to the Kardashian camp dished to CDL, “Kanye and Kim’s marriage is shaky at best, and Kanye is sick of her family drama. He took time off to spend the holiday weekend in NYC with Kim and North, not babysit Kourtney’s son and spend all day hearing Kim on the phone gossiping over the big break-up. Kanye has threatened Kim with a divorce on more than one occasion if she doesn’t distance herself from the Kardashian Family drama – and she seems to be doing the opposite and making sure she is right in the center of it.”

Do you think Kanye West is being petty, and he should be more supportive of Kim’s sister and his nephew by marriage? Or does he have a point? Do you think Kim and Kanye will still be together by the time their second baby is due? Let us know what you think in the comments below!

Kim, Kourtney and Khloe Kardashian are all dressed in white while out for dinner at Casa Escobar in Westlake Village, California on July 7, 2015. Despite dumping longtime partner Scott Disick, Kourtney had a smile on her face and looked to be in a good mood.

Kourtney Kardashian, her kids Penelope and Mason, Kim Kardashian, her daughter North West, their mother Kris Jenner and her boyfriend Corey Gamble spotted out celebrating Penelope’s 3rd birthday at Disneyland in Anaheim, California on July 8, 2015. Penelope’s father Scott Disick was a no show as he is off partying in Boca Raton, Florida after splitting from Kourntey.