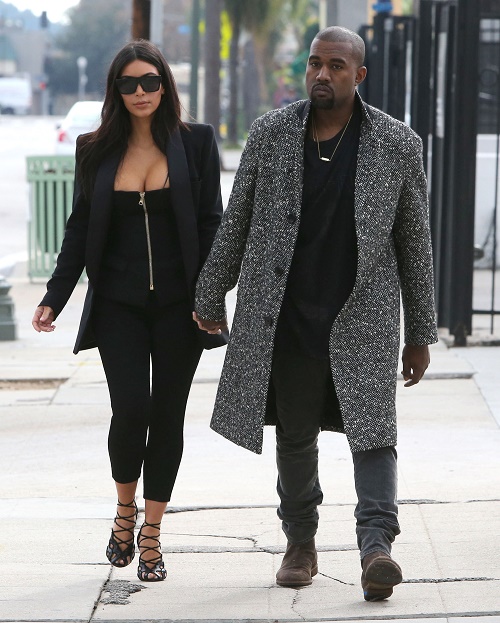 All the signs point to Kim Kardashian getting pregnant with her second child, and not just because all the evidence points to it. In the actual video, Kim is seen carrying several pregnancy tests, including one that reads positive. How else can we construe that except to assume that Kim Kardashian is actually pregnant with Kanye West’s child – again?

Khloe Kardashian also posted a photo of her, Kim, and Kris Jenner making shocked faces with the pregnancy test smack dab in the middle of the photo. I think we can rule out Kris Jenner [menopause] and Kendall Jenner [too young and too scandalous, even for the Kardashians], but either Khloe or Kim is a good bet. Khloe Kardashian would have to be pregnant with French Montana’s baby if she was pregnant, and I think that’s an unlikely scenario considering that we have gotten absolutely zero hints that she’s at all expecting a child.

Kim, on the other hand, has been dropping hint after hint over the last few months regarding her pregnancy – or lack thereof. We know she and Kanye have been trying, and we’d heard that she was having some difficulty conceiving. However, we also know that Kanye West desperately wants another child, and even if Kim doesn’t want one or literally CANNOT conceive one, Kanye will always find a way. Whether that means knocking her up in an unorthodox method or paying for someone to carry their baby, he’ll make sure he gets that second child. But looking at this video, Kim being pregnant might be a strong possibility.

What do you guys think? Are Kim Kardashian and Kanye West expecting their second child, and is Kim Kardashian pregnant? And what do you think of the promo video from Keeping Up With the Kardashians’ tenth season? Let us know your thoughts in the comments below.