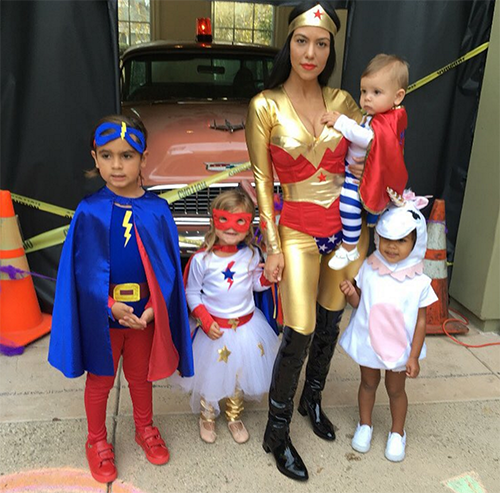 Despite her break-up from Scott Disick, Kardashian has been keeping it together. She has been a devoted sister as well with showing support to sister Khloe and Lamar Odom, even by when he was in the hospital with a poor prognosis.

Amidst the craziness, the 36-year-old showed her three adorable kids – Mason, 5, Penelope, 3, and Reign, 10 months – in Halloween garb. She shared the photo on Instagram of her superhero “squad” which included her niece North West, 2.

Kourtney Kardashian wore a one-piece gold Superwoman costume revealing her tight body shape while holding the adorable Reign. Mason wore a Superboy get-up with red tights, blue mask, and a blue cape. Penelope was dressed in a cute white ensemble from white tulle skirt to donning a red mask. North West was as cute-as-a-button dressed as a white and pink unicorn, which is really not a superhero, but she’s North West so she will get a pass. Plus, don’t all kids get to dress as a unicorn at least once?

Kourtney Kardashian is not a real superhero like the fictional ones, but she does appear to be a super mom in the real world.