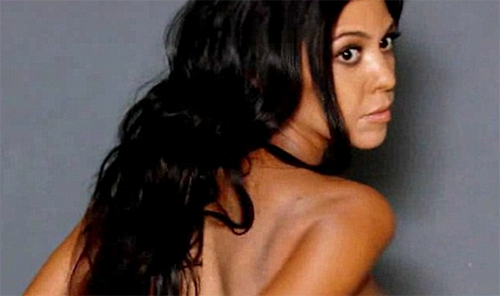 It is not every day that you get to see naked pictures of Kourtney Kardashian all over the internet. Sure, we have all saw her sister Kim Kardashian’s goodies more times than we wanted to, and Khloe Kardashian is getting pretty X-Rated these days. But, of all the sisters, Kourtney Kardashian is by far the most conservative. I mean, she still has her own butt!

Naked pictures of Kourtney Kardashian hit the internet today, courtesy of the always classy website Media Take Out. It all started last night on E! during an episode of Keeping Up With The Kardashians. Kourtney Kardashian apparently was posing naked for a photo shoot. You know one of those photo shoots where she technically poses naked – but when the photos hit the magazines you can’t actually see any of her naughty areas.

Well, E! apparently had an incompetent intern in the editing room, because when they aired the footage on national television, they forgot to blur out naked Kourtney and everyone tuning in to Keeping Up With The Kardashians got a free peep show. MTO has taken the liberty of saving the naked pictures of Kourtney Kardashian and posting them online for your viewing pleasure.

But naked pictures of Kourtney Kardashian are pretty rare. Maybe Kris Jenner thought that exposing her daughter’s goodies on national television would boost ratings? Hey, it would NOT be the first time that Kris Jenner pimped one of her daughters out for the family’s reality TV show!