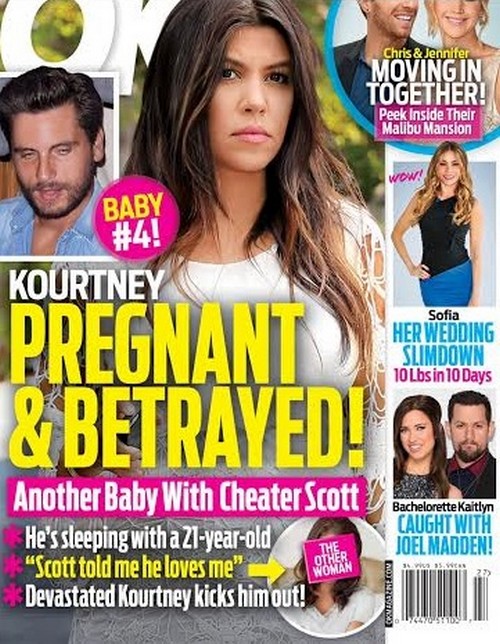 Kourtney Kardashian is sick of her drunk boyfriend baby-daddy Scott Disick’s cheating, and she has dumped the prolific boozer for good. But, here’s the kicker – Kourtney is reportedly pregnant with baby number four! Kourtney Kardashian just gave birth to Scott’s third child Reign six months ago, but the Keeping Up With The Kardashians star is pregnant AGAIN, according to the latest cover of OK! Magazine.

Kourtney Kardashian has been at home taking care of her newborn baby and two toddlers while Scott Disick parties from the East Coast to the West Coast, leaving a trail of women claiming they had sex with him in hotel rooms. According to the July 6 edition of OK! Magazine, when Scott learned that Kourtney was pregnant again with their fourth baby, he became completely unhinged and began partying even more than before. Pregnant Kourtney busted Scott at Trump SoHo in Manhattan, and found out he had sex with a 21 year old girl in his hotel.

An insider dished to OK!, “Kourtney heard that Scott told the girl that he loved her,” and that apparently was the final straw. The insider added, “Kourtney already feels like she is raising the kids alone anyway, so she is prepared. Living with him is actually like having a fourth child, so she thinks that it will be easier from here on out.” At the end of the day, Kourtney is breaking up with Scott for the sake of her children. OK! Magazine explains, “She doesn’t want the kids to see her letting him walk all over her. She thinks it is a horrible example for them.”

It seems like every time Kourtney gets pregnant, she kicks drunken Scott to the curb, and then once the baby comes she takes him back. Remember how “done” she was with Scott in the Hamptons when she was pregnant with Reign? And the same can be said for her pregnancies with Mason and Penelope. What do you think about Kourtney being pregnant again? Is she in over her head? Will she wind up taking back cheating Scott once her pregnancy hormones level out? Let us know what you think in the comments below!