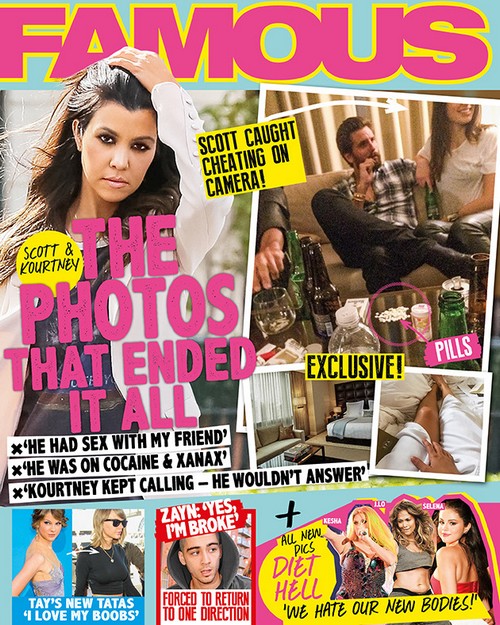 Scott Disick has allegedly been caught cheating on Kourtney Kardashian…again. Photos on the cover of Famous of Scott partying in New York with a crew of “friends” show Disick sitting in front of a pile of what appears to be drugs and woman he is supposedly cheating with. According to the report, images of Scott’s drug-fueled affair were taken after the reality star invited a group of people, including a pretty brunette, to his SoHo suite.

What? The holistic rehab center in Costa Rica did not cure Disick’s alcohol abuse and drug addiction? Shocking! Scott underwent the “Iboga treatment,” which basically purges the body of the drugs by drinking some stuff that makes you vomit and hallucinate, and freak out. It’s kinda like eating some questionable leftovers, and combining that case of food poisoning with the stomach flu, while some guys bang on some tribal drums until you cry and beg for death.

However, it appears the treatment didn’t work, and Scott is allegedly back to partying while seeking comfort between the legs of any woman who is not the mother of his children, Kourtney Kardashian. Famous has images of Scott Disick partying with pals in his suite, and the details of yet another affair.

According to the “friends” Scott partied with, while in New York, Scott’s handlers made the new pals give up their mobile devices so none of his douchebaggery could be caught on camera. “At first, his guard took our phones away,” the party-goer revealed. “But then [Scott] wanted more drugs, so he gave everyone back their phones so he could get more from people that had connections.” Disick then reportedly demanded more coke and Xanax, while focusing his attention on a brunette who caught his attention.

The partying and cheating continued according to the magazine’s source. “Scott had sex with my friend all week and was really interested in her,” the friend squealed. “Through the next four days, he spent most of his time with his new love interest. She stayed and slept at the hotel  and took care of him while he was drunk and on drugs.”

Meanwhile, Kourtney Kardashian repeatedly tried to get in touch with Scott, but he was too busy partying and hooking up with the mystery brunette. “Kourtney kept calling,” the friend told the magazine, “but Scott wouldn’t answer.”

Will this drug-fueled cheating scandal all be the final straw? Will Kourtney Kardashian finally split with Scott Disick? – probably not – after all Kourtney, for reasons of her own, has chosen to have 3 children with Scott Disick – obviously he fills certain needs for her.