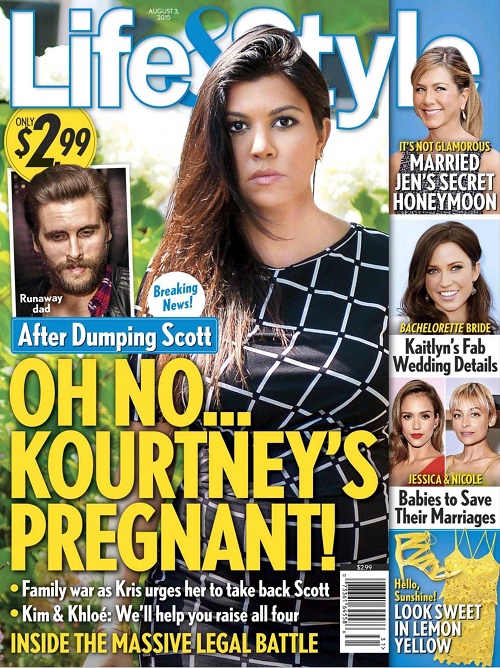 Kourtney Kardashian and Scott Disick broke up for the umpteenth time this month, but this split appears to be the real deal. Kourtney finally snapped after Scott went on another drug-fueled booze bender, and was photographed canoodling with his ex Chloe Bartoli. But before Kourtney kicked Scott to the curb she made the mistake of having sex with him one last time – and according to a new report she is pregnant with his fourth baby.

Kourtney is already raising her and Scott’s three children – Mason, Penelope, and Reign – on her own. Now, she will be adding a fourth baby to their brood, and the now single mom is freaking out. According to this week’s edition of Life & Style Magazine, Kourtney is panicking at the thought of having another baby with her boozing baby-daddy Scott Disick.

An insider dished to Life & Style Magazine, “It happened during a rare moment when Scott was being charming, but now the thought of having another child with him is giving her a panic attack. It was right after photos of Scott with another woman came out that Kourtney realized she had missed her period. She was stunned, she is definitely not ‘down’ with having Scott as her baby-daddy anymore.”

Scott Disick has no idea that his ex has another bun in the oven. The Kardashians are trying to be tight-lipped about the baby news because they know he will use it to try and weasel his way back in to Kourtney’s life. The only reason Kourtney has put up with Scott for this long is because she wanted her children to grow up in a two parent household, and Scott knows that. He could easily convince hormonal Kourtney to take him back for the sake of the kids and the unborn baby.

Do you think that Kourtney’s pregnancy could wind up reuniting her and her baby-daddy? Or will she stay strong this time and not forgive Disick? How will Scott handle the news when he learns Kourtney is pregnant again? Let us know what you think in the comments below!