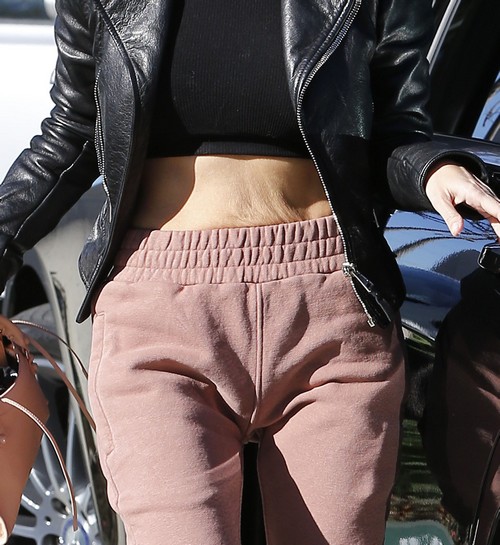 Why was Kourtney Kardashian showing off stretch marks and a flabby tummy? If Kourtney is going to keep dating Justin Bieber then a bit of plastic surgery may be in order. Or does the Biebs like the “Keeping Up with the Kardashian” star’s body just the way it is?

Kourtney was photographed taking daughter Penelope Disick and niece North West to a ballet class on Wednesday, December 16. The mom of three was wearing a midriff bearing t-shirt under a leather jacket and it was clear that Kourt’s body has not completely bounced back since one-year-old son Reign Disick’s birth.

When Justin Bieber hooked-up with Kourtney on Friday, December 11 did the singer notice the stretch marks and loose skin? The duo was reportedly snuggling and kissing at Nice Guy in West Hollywood that night.

Later the Biebs and Kourt moved the party to the Blind Dragon Club where Bieber and Kardashian continued the cuddling and kissing until about 2 a.m. TMZ reported that Kourtney was in Justin’s hotel for several hours.

Forget the age difference, Kourtney is 36 – 15 years old than Justin, that’s only part of the problem here. What is going on with the Biebs? Does the singer have mommy issues? Not to be mean, but Kourt really does need a nip-tuck here and there. Was Justin too drunk to notice Kourt has some serious hanging skin and stretch marks?

The clubs where Justin and Kourtney were hanging out were probably nearly dark. In the light of day was Justin Bieber a little surprised that Kourtney Kardashian’s rocking body isn’t so rocking? Is that why Kourt was caught sneaking out of the Montage Beverly Hills hotel all alone around 4 a.m. the night she reportedly was hanging all over Justin?

Is it possible Justin Bieber and Kourtney Kardashian will become a couple and begin dating openly – will they marry? Do you think Kourtney will tighten things up to get rid of the loose skin and stretch marks? Does Justin even care? After all, the Biebs probably won’t hang in there for any kind of serious relationship with Kourtney.