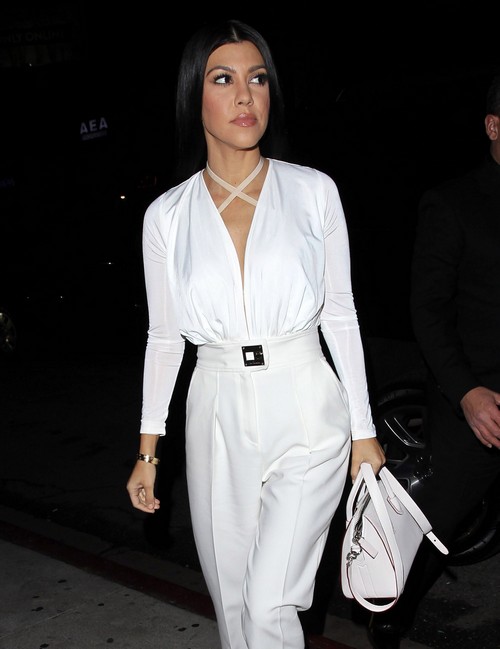 Kourtney Kardashian has been indulging in a secret fling sleeping with Justin Bieber many times in the months since splitting with longtime boyfriend Scott Disick. CDL reported several times that the Keeping Up With The Kardashians star met up with the Sorry singer in a more than friendly manner.

Now it’s been confirmed that the 36-year old mother of three is sneaking around with the 21-year old Bieber, who has childishly been bragging to his friends about the hookup.

“Justin bragged to friends recently that he has been hooking up with Kourtney Kardashian,” according to an Us magazine insider. “Oh yeah, that’s definitely happening and has been for some time now,” the gossip rag claimed they were told by another secret source. “Every time Kourtney and Justin are together they’re extremely flirtatious. They text each other all the time.”

It’s no secret that Justin Bieber is a friend of the Kardashian family and used to be Kourtney’s Calabasas neighbor. Rumors that the two might be more than friends were fired back up over the weekend when Kourtney was seen leaving The Montage in Beverly Hills around 4 a.m. on Saturday after spending much of Friday night with Justin.

Although Bieber left a the Blind Dragon karaoke lounge about an hour and a half before Kardashian, rumors of their most recent hookup started making rounds when Kourtney was spotted leaving the hotel where Justin often stays when in town. The KUWTK star and her much younger lover were seen together at the West Hollywood celeb hotspot The Nice Guy with a group of friends before leaving to sing some karaoke elsewhere.

Before Kourtney and Justin’s most recent rendezvous, the famous friends with benefits have met up that The Nice Guy a few times before. Back in October the unlikely pair met up at the WeHo club and then headed out to Universal Studios to celebrate Halloween Horror Nights together.

Certainly there will be more hookups between Kourtney Kardashian and Justin Bieber, especially if the relationship is no longer a secret. It’s not like the 15-year age gap would stop the celebs from becoming a real couple. It seems that Kourtney doesn’t mind following in the footsteps of her mother Kris Jenner. There is a 25-year age difference between Jenner and her 35-year old boytoy Corey Gamble.

Now that everyone knows Kourtney has been spending quality time with the young What Do You Mean? singer, will she go public with the shocking relationship? Or will the Keeping Up With The Kardashians star try to carry on like nothing ever happened and warn Bieber to shut his mouth about their secret meetups?