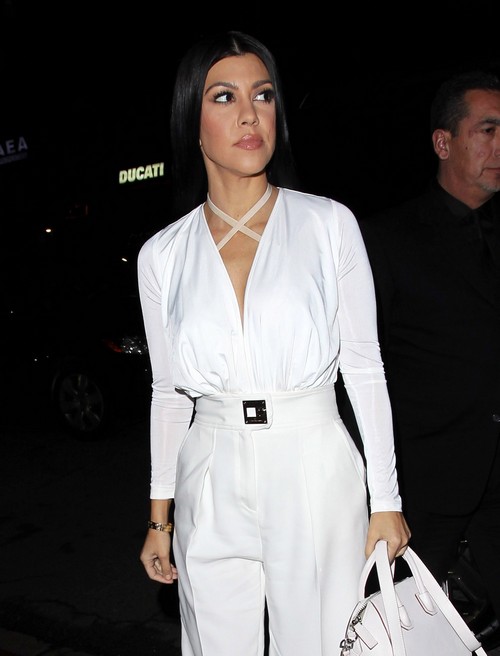 Kourtney Kardashian was caught hooking up with Justin Bieber again. The KUWTK star has made it clear she is done with Scott Disick for good this time. The mom of three is sneaking around and playing cougar with the Boyfriend singer, not reconciling with her supposedly rehabilitated reality star ex.

Kourtney was seen out again at The Nice Guy in West Hollywood on Friday, December 11. Kardashian wasn’t alone either. The 36-year old cougar was seen spending time with Justin Bieber again. The unlikely couple spent some time at the WeHo favorite and then took off to sing some Karaoke at The Blind Dragon.

According to an Us magazine report, Kardashian and Bieber were part of a bigger group of Friday night partiers. The Keeping Up With The Kardashians star and her Baby singing boy toy were likely using the group friend date as cover for their night out on the town before secretly hooking up later.

It really did look like the former neighbors had a secret hotel fling based on the timeline of Kourtney Kardashian’s night out partying with Justin Bieber. Once at the karaoke bar, Bieber slipped out the back about an hour and a half before Kardashian left.

The Us Weekly report claims Kardashian headed for The Montage in Beverly Hills. That happens to be Bieber’s place to stay when he comes to town and also the same hotel where he serenaded Selena Gomez just weeks ago.

Kourtney must have had a great time with whomever she was visiting at The Montage because the mom of three didn’t emerge until 4 a.m. when she was headed home. This wouldn’t be the first time Kardashian and Bieber were seen partying together and then were rumored to have hooked up after.

Kourtney and Justin have been spotted together at The Nice Guy several times. Back in October they hit up the WeHo hotspot before heading to Universal Studios for Halloween Horror Nights.

Prior to that hookup, Kardashian and Bieber reportedly were both at The Nice Guy with separate parties when Kardashian caught a ride home with her 21-year old friend.

Kardashian is getting a lot more bold when hanging out with the young What Do You Mean? singer and doesn’t seem to mind all the rumors about their hookup. Kourtney Kardashian made it clear that she and Scott Disick won’t be getting back together according to a new TMZ source.

Maybe hooking up with Bieber is Kourtney’s way of sticking the fork in her old relationship with Disick. A secret tryst with a man-child who is 15 years younger certainly seems like the Kardashian kind of way to make sure the split with Scott Disick sticks.

Kourtney Kardashian enjoys a night out at The Nice Guy nightclub in West Hollywood, California on December 11, 2015 by FameFlynet