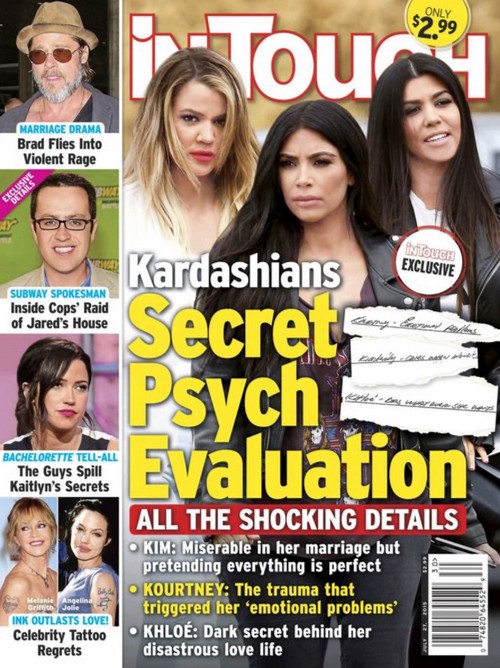 Kris Jenner and the Kardashian kids are media sensations, and we never grow tired of their never-ending scandals. But, according to the July 27 edition of In Touch Magazine, the majority of the Kardashian Family’s headlines aren’t that far from the truth – and the troubled family has some serious issues. In Touch got their hands on a psych evaluation of the reality TV family, and it looks like Kris Jenner has done a serious number on her troubled kids: Kim Kardashian and siblings Kourtney, Khloe and Rob.

The July 27 edition of In Touch Magazine teases that part of the reason Kim, Kourtney, Khloe, and Rob are so emotionally unstable is because of damage their momager Kris Jenner did early on in their lives. “Kris’s selfish behavior which led to her divorce [from Robert] had both an immediate and lasting impact on her children. Kim doesn’t show effects of the divorce outwardly, she keeps it in but cries when she is alone. With Kim that means she still approaches her problems by acting like everything is perfect.” Translation? Kim Kardashian’s marriage from Kanye is far from as perfect as she likes to pretend it is, and there is some truth to those nasty divorce rumors.

According to the leaked psych evaluation, Khloe’s psychological issues are obvious – seeing as how she still won’t officially divorce her estranged ex-husband Lamar Odom. The magazine teases, “She doesn’t want to repeat what Kris did and wants to stay married because she thinks that marriage should be forever. Unfortunately the inability to show her own feelings has contributed heavily to her disastrous love life.” Kourtney’s issues with her mother Kris Jenner and her divorce have obviously also played a part in her troubled relationship with now ex-boyfriend Scott Disick as well. Rob Kardashian, the youngest of the Kardashian siblings, suffered the most from his narcissistic mom Kris Jenner’s behavior. Thanks to her psychological issues and less than stellar parenting, he has turned to drugs and food to try and solve his problems.

In Touch Magazine’s insider dished, “Kris behavior and her greed and fame-pimping may have made them one of the most well-known families on the planet, but it all came at the cost of being a sad, dysfunctional mess.”

Do you agree with the psych evaluation of the Kardashians? Do you think all of their issues stem back to their narcissistic mother Kris Jenner? Let us know what you think in the comments below!