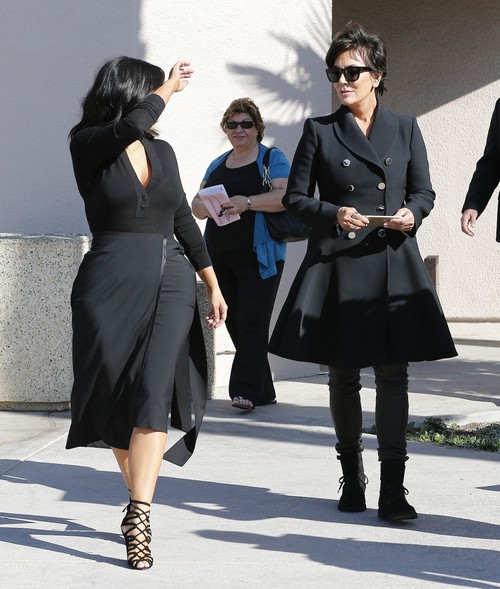 Kris Jenner has had nude video of herself stolen from her hacked iCloud and is being blackmailed according to a criminal complaint filed with the L.A. County Sheriff’s Department. It seems Kim Kardashian isn’t the only member of her family with a nude video in existence. TMZ reports that indoor surveillance footage of Kris Jenner has been hacked from her iCloud and that video footage shows Kris in her home naked. Sources close to the production of “Keeping Up with the Kardashians” say Kris will call a family meeting to discuss the leaked video on an upcoming episode. Kris will also explain that someone is blackmailing her demanding money in exchange for the footage. How will the rest of the Kardashian clan feel about Kris bearing all on camera? You’ll have to watch the show to get the full details, but most of the Kardashians are said to be disgusted by the whole situation.

Kim Kardashian, on the other hand, may feel a little differently. After all, we know that Kim doesn’t seem to have a problem with putting herself out there. From her sex tape with Ray J to her recent cover shoot for Paper Magazine, she’s proven that she doesn’t have much of an issue with nudity. It’s possible that she could encourage Kris to make the most of the situation. The Kardashians obviously love media attention and a nude video always seems to get it. Kris Jenner filed a criminal complaint with the L.A. County Sheriff’s Department about someone harassing her and hacking into her iCloud. We’ll let you know if more information surfaces.

Ultimately, a bit of nudity isn’t going to make much of a difference in the public opinion of Kris Jenner. You either like Kris or you don’t. Besides, no one in the Kardashian family really has a reputation to destroy. They seem to thrive on the media circus that often surrounds them. It’s not like anyone would be shocked, even if the video had been intentionally taped and leaked. Deep down, Kris Jenner probably considers it a happy accident. At the end of the day, people are talking about the Kardashians and the Jenners, which is really what they seem to want most in life.

What do you think about the nude video of Kris Jenner? Do you think it will be leaked? Would naked footage really change your opinion of any of the Kardashians or Jenners? Let us know what you think in the comments below and don’t forget to check CDL for the latest updates on the Kardashian and Jenner families.