Kris Jenner Speaks Out On Caitlyn Jenner Transition: ‘I Think It’s Amazing’ – But Does She Hide Her True Feelings Behind Booze? 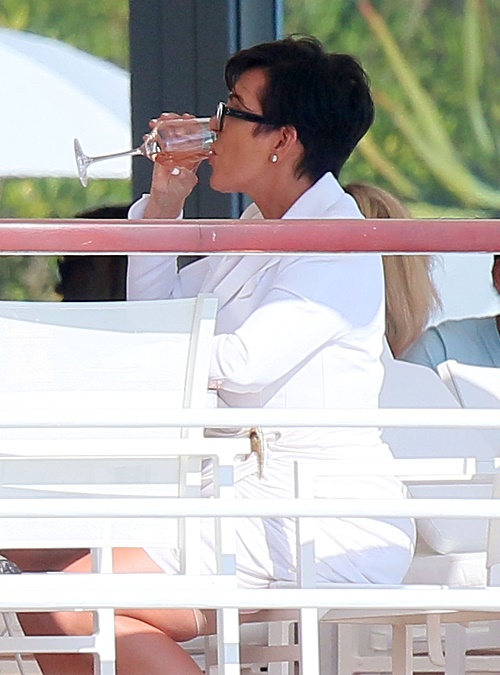 Kris Jenner has finally broken her silence on Caitlyn Jenner’s transition, and jumped on the “We Love Caitlyn” bandwagon. Since Caitlyn’s Vanity Fair cover and worldwide debut, Kris Jenner has remained mum on the huge story – despite the fact that the rest of her family and kids flooded social media with support for Caitlyn. Of course, Kris was none too happy about the way Caitlyn portrayed her in the VF interview and her appearance on Diane Sawyer – implying that Kris was a monster who forced her to live as a man to keep up appearances.

Kris Jenner stepped out with her much younger boyfriend Corey Gamble to attend Daily Mail’s yacht party in Cannes, and she was quickly cornered by the media. Kris had nothing but nice things to say about Caitlyn, formerly known as Bruce – not that she really had a choice. Kris raved, “I think it is amazing. I think that someone following their dream is truly inspirational to a lot of people…you have to do what makes you happy.”

That must have been very painful for the Keeping Up With The Kardashians momager. Kris Jenner is still seething, and reportedly popping pills and boozing to cope with the scandal. Not only did Caitlyn Jenner paint her as a monster and turn the entire LGBT community against her, but she also cut Kris out of millions of dollars by firing her right before the transition. But, at this point, Kris has no choice but to publicly support her former husband. Her kids have all jumped on the Caitlyn bandwagon, and speaking out against Caitlyn’s transition at this stage in the game would be career suicide. So…point for Caitlyn Jenner!

How do you think Kris Jenner really feels about Caitlyn Jenner? How funny is it that she has no other options but to support Caitlyn? Let us know what you think in the comments below!