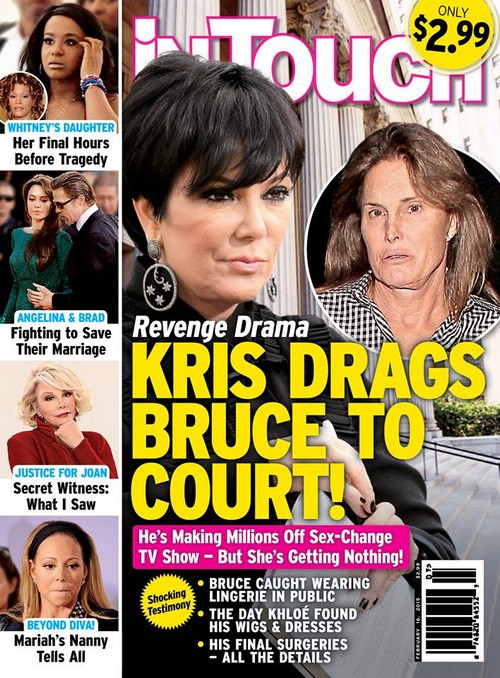 Is Kris Jenner really taking Bruce Jenner to court to stop his sex change and documentary TV series on his transition to a woman? Kris Jenner’s greedy, money-hungry Momager ways are nothing new to us – the Kardashian continuously pimps out her children to anyone who will pay a couple dollars for their “brand.” Kris Jenner has made money off her children’s divorces, childbirths, sex tapes, acne, drinking problems, arrests, and yeah we could go on for days. So, it’s not a surprise that Kris Jenner is flipping her lid over Bruce Jenner’s new TV show and docu-series about his sex change and transition in to becoming a woman.

Why is Kris Jenner so upset? Well, spoiler alert – it has nothing to do with “what he is doing to their family” or how embarrassed she is about the scandal. Kris Jenner is seeing red because she is not making a dime off the TV show – and Bruce is getting a major pay day without her. The cover of the February 16th edition of In Touch Magazine reveals, “Kris Drags Bruce To Court, He’s Making Millions Off Sex Change TV Show, But She’s Getting Nothing!” The all new cover of In Touch Magazine goes on to tease that they have inside details on Bruce’s transition, including how Khloe Kardashian found his wigs and dresses, the final surgeries he plans to receive, and how he was caught in public wearing lingerie.

In other celebrity gossip news, this week’s cover of In Touch Magazine reveals that Mariah Carey is in some serious hot water over her “diva behavior” and another member of her staff is suing her for mistreatment and dishing all the details on the singer’s diva antics. Angelina Jolie and Brad Pitt’s marriage is in trouble again (or still), but no worries they are “saving it.” And, a new witness has come forward on behalf of Joan Rivers and is telling all about the day that the legendary comedian’s life came to an end during routine surgery. Also, In Touch has some of the latest details surrounding the tragic overdose of Whitney Houston’s daughter Bobbi Kristina Brown.

So, on what grounds do you think Kris Jenner can take Bruce to court? Can she really get him to stop going public with his sex change, or force Bruce to split the proceeds of his TV show since they are now legally divorced? Isn’t it funny that as soon as their divorce was final, Bruce scored his own TV show? Did he keep it a secret form his soon-to-be ex-wife just because he didn’t want to share the money with her? Let us know what you think in the comments below!