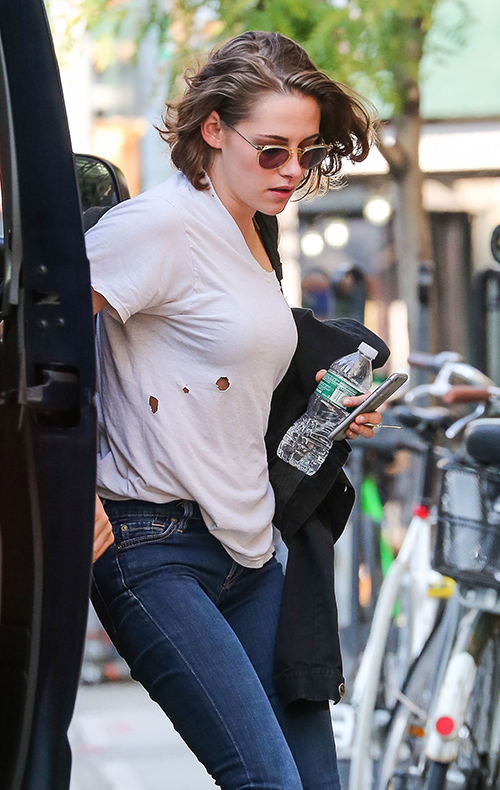 Kristen Stewart and Robert Pattinson made box office magic with their romance, and it appears the ‘American Ultra’ star is going to try it again. Kristen Stewart dumped Alicia Cargile, and new rumors claim she left her lesbian lover for Taylor Lautner. Is it a PR stunt to reheat the Twilight star’s career?

By all accounts, Kristen Stewart was in love with her assistant turned girlfriend. After cashing in on her showmance with Robert Pattinson, Stewart began dating Alicia and the two were photographed kissing and enjoying plenty of PDA. Kristen never confirmed the relationship, but it was pretty obvious. The romance between Kristen and Robert was great for packing theaters and was beneficial for everyone, including Taylor Lautner who played Jacob Black – the third part of the Twilight love triangle.

Eventually, Kristen Stewart had a very public affair with Rupert Sanders that effectively ended the Twilight showmance. Robert moved on with FKA Twigs and is enduring a rocky engagement with the singer, but Taylor Lautner’s career has sputtered out. However, Kristen has been bringing the former heartthrob with her to premieres and public events. Naturally, media outlets are combining her break up from Alicia and reheated interest in Taylor as a romantic move.

Woman’s Day reported that Stewart has “finally fallen” for her former co-star and is enjoying a romance with Lautner. Their sources claim Kristen has “strong feelings” for Taylor. They support their story with Kristen and Taylor’s “flirty” behavior at the premiere of ‘American Ultra’ back in August.

Too bad this screams PR stunt. The magazine claims Taylor Lautner and Kristen Stewart have been going on “secret dates” and Kristen is falling for Taylor. However, Taylor has also been attached to “Pretty Little Liars'” Ashley Benson. The Twilight star also has a string of flops and a new project in post-production, which is convenient for rumors he is dating a newly single Kristen Stewart.

What do you think of a possible Kristen Stewart and Taylor Lautner romance? Is it a PR stunt, showmance, or the real deal? Let us know your thoughts in the comment section below.