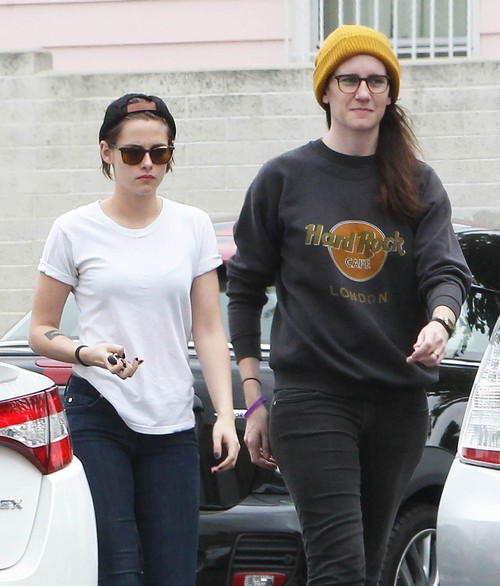 Robert Pattinson and his new girlfriend FKA Twigs are engaged and currently planning their wedding – and Kristen Stewart can’t even bare the sight of the happy couple. Droves of celebrities arrived at the annual Met Gala on Monday May 5 to walk the red carpet, including Twilight star Robert Pattinson and his fiancée FKA Twigs – but one major star was not in attendance and everyone noticed…Kristen Stewart opted to skip the event at the last minute.

Robert Pattinson and FKA Twigs have been dating for months now, but Monday May 4 was their first red carpet debut as an official couple – and the paparazzi went wild snapping photos of Twigs’s huge engagement ring. Of course, she made sure it was front and center. It’s really no wonder Kristen Stewart didn’t want to attend the Met Gala, the last thing anyone wants to see is their ex and his future wife making a huge spectacle on the red carpet and flaunting their relationship.

Kristen Stewart has obviously moved on from Robert Pattinson, and is living with her girlfriend Alicia Cargile. But, that doesn’t mean she wants to watch everyone fawn over Robert’s fiancée. Although Kristen’s camp insists that she had a prior commitment the night of the Met Gala, our insiders have confirmed that Kristen had already picked out a dress for the event and gave her glam team less than 24 hours notice that she had decided not to attend.

Regardless of why Kristen Stewart skipped the Met Gala, one thing is for sure – it was probably for the best because the Twilight actress is still bitter over Robert and FKA Twigs’s upcoming wedding. In a recent interview last month Stewart even backhandedly dissed her ex-boyfriend by saying that filming sex-scenes with him for Twilight “was agony.” It’s probably best for all parties involved if Kristen and Robert just keep their distance over the course of the next few months leading up to the big wedding.

Why do you think Kristen Stewart skipped the Met Gala? Would it have been super awkward if she did attend? If Kristen has moved on with her girlfriend Alicia Cargile, does she have any reason to be so bitter about Robert Pattinson and FKA Twigs’s wedding? Let us know what you think in the comments below!

Kristen Stewart and her girlfriend Alicia Cargile stop by a studio in Santa Monica, California on May 6, 2015. Kristen is back to her normal routine after recently attending the Chanel 2015/16 Cruise Collection show in Seoul, South Korea. Rumors are swirling that Kristen didn’t attend the recent Met Gala in NYC so she could avoid any awkward encounters with her ex Robert Pattinson and his new love, FKA Twigs. FameFlynet