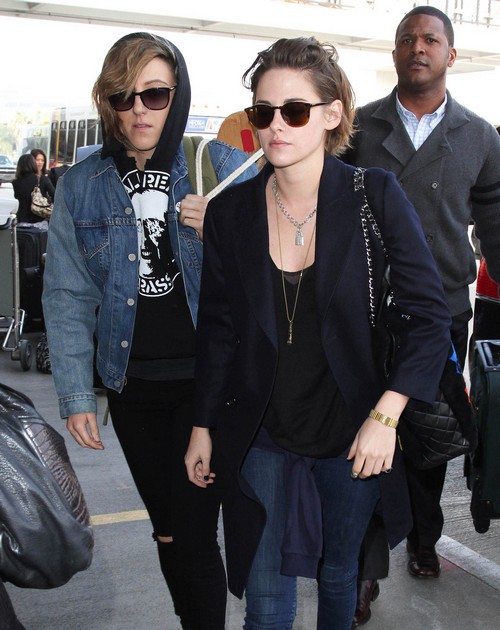 Kristen Stewart and Alicia Cargile are getting serious in their romantic dating relationship, and if you need any more proof of that, don’t look any further than this latest report courtesy of Hello Magazine. According to the report from Hello, Kristen Stewart took Alicia Cargile as her date to Riley Keough’s surprise wedding to stuntman Ben Smith-Peterson.

That’s right – DATE. These two have managed to stay undercover for such a long time that it almost seems like they started dating a few weeks ago – even though, realistically, it’s been at least a few months. They’ve just done a fantastic job of keeping their dating and romance undercover, which was also helped by Twi-hard delusions about a Robsten reunion happening. However, both Kristen and Alicia did ramp up their PDA over the last few weeks, which led the public to finally figure out what was happening with them. And now that we know that Kristen Stewart and Alicia Cargile are dating – not just ‘best friends’ – all these relationship milestones are starting to seem like bigger deals.

I mean, taking your significant other to a friend’s wedding is a big move, right? It’s something that you only do when you’re serious about them, and want everybody to meet them. Plus, there’s already the weird situation with Riley Keough and Kristen Stewart, considering they both dated Robert Pattinson. But clearly, they remained friends… and good friends, at that.

Anyway, what do you guys think about Kristen Stewart taking Alicia Cargile as her date to Riley Keough’s wedding? Is she making a statement? Are the two getting serious? Are they moving in together, as has been rumored by the tabloids? Or are they still ‘friends’ with a little something extra happening on the side? I mean, anything’s possible with Kristen….

‘Twilight’ actress Kristen Stewart departing on a flight at LAX airport in Los Angeles, California with her rumored girlfriend Alicia Cargile on February 4, 2015. While promoting her newest film, ‘Still Alice,’ Kristen revealed that after working “for a solid two years,” she is ready for a break adding, “I need to breathe.” This recent announcement was made shortly after Kristen was spotted canoodling on a beach with Alicia. FameFlynet Photo Credit