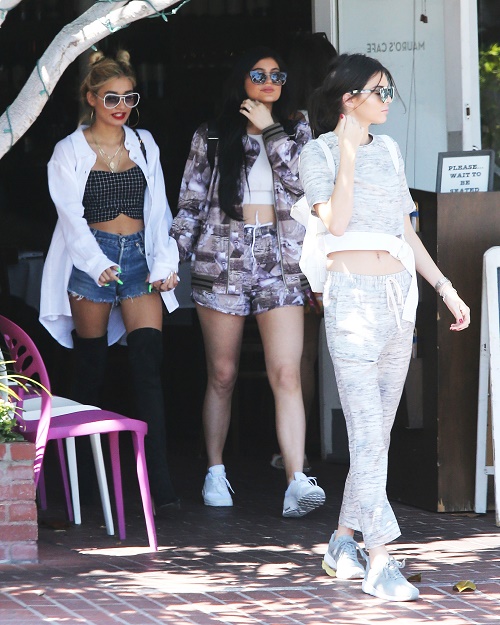 Kylie Jenner and Kendall Jenner at war – the youngest of the Kardashian sisters reportedly hate each other and their slow-simmering feud has finally reached a boiling point. At one point, Kylie and Kendall Jenner were a package deal, but the two girls are growing up, growing apart, and have become two entirely different people. While Kendall has been dabbling in high-fashion, Kylie has been dabbling in rappers and plastic surgery.

According to the latest edition of OK! Magazine, Kylie is furious that her sister Kendall is moving on without her and leaving her in the dust while she creates a successful career for herself – and the 17 year old’s jealousy and temper have reached dangerous levels. An insider dished in this week’s OK! Magazine, “Kendall has a real career and is making an insane amount of money. Kylie thinks she has become super arrogant. She’s so jealous in fact that she has threatened to reveal a dark secret that could bring Kendall down.”

The tabloid goes on to reveal that Kendall and Kylie’s feud has reached violent levels and on a stint on the MTV show Ridiculousness Kendall even admitted that her crazy little sister pulled a knife on her in their kitchen one day. It’s a good thing there wasn’t any cutlery backstage of Kanye West’s recent fashion show – because witnesses also got a front-row seat at another one of the sisters’ epic fights there.

Kim and Khloe have both taken sides, and are only adding fuel to the Jenner sisters’ fire. Kim is in Kendall’s corner, obviously because she has fashion connections, and Khloe has sided with Kylie because she totally understands what it is like to be the black sheep of the family.

So, are you Team Kylie or Team Kendall? Do you think that Kylie is just being immature and jealous, or as Kendall’s modeling career gone to her head? How crazy is it that Kylie actually pulled a knife on her own sister? Let us know what you think in the comments below!