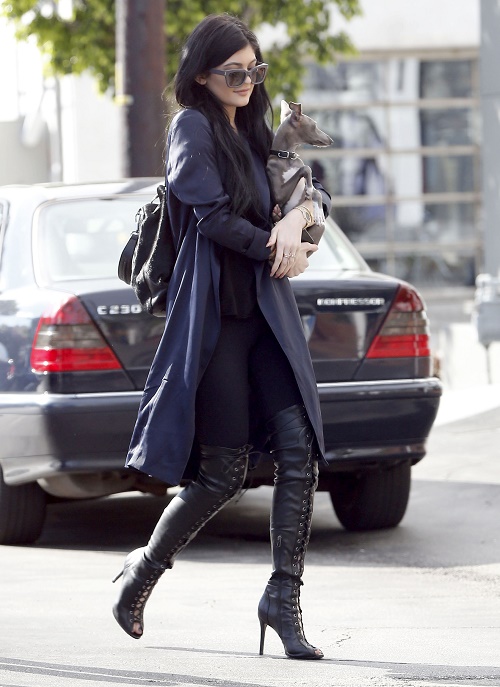 Khloe Kardashian and her rapping boyfriend French Montana are still dating and hooking up – it appears they never really stopped. Recently, Khloe and French went out on a double date with Khloe’s little sister, Kylie Jenner, and her boyfriend Tyga. Khloe and French Montana were beaming in the photos they posted on social media during their outing – but rumor has it that behind closed doors the couple is having some serious issues. Khloe has baby fever and desperately wants to get pregnant. It’s no secret the reality TV diva has had infertility woes in the past. Not only is she still not getting pregnant but she is growing more and more frustrated because French Montana doesn’t seem to care whether they do or don’t have a baby.

Khloe has already had to sit back and watch her sisters Kim and Kourtney pop out babies, and now she is going to have to watch her 17-year-old sister do the same! According to a new report from an insider at the Kardashian camp, Khloe and her entire family is positive that Kylie Jenner is pregnant with Tyga’s baby, she just isn’t ready to make the announcement. Kylie’s drastic weight gain, coupled with her sudden decision to buy a house suitable for a family (instead of a condo or overpriced beach house), and overall healthy glow, has her friends and family certain there is a baby bump in her near future.

Since Khloe and her family became convinced that Kylie Jenner was pregnant – she hasn’t let her little sister out of her sight, and is constantly planning activities with her. Khloe’s pals fear that she is trying to live vicariously through Kylie, and it is unhealthy to say the least. The insider dished to CDL, “Khloe wants to have a baby so badly, everyone is worried about how clingy she is being with Kylie. She joked that she was going to raise Kylie’s baby for her since she is so young and everyone laughed. But, now it kind of seems like she was dead serious.”

Nothing about the Kardashian family ceases to amaze us these days. Considering some of the family’s scandals, Khloe stealing her 17-year-old sister’s baby would be pretty run of the mill. What do you think of Kylie and Tyga having a baby? Is Khloe getting a little too close to her pregnant sister for comfort? Do you think Khloe would try to steal her little sister’s baby – since she is so desperate to have one of her own? Let us know what you think in the comments below!