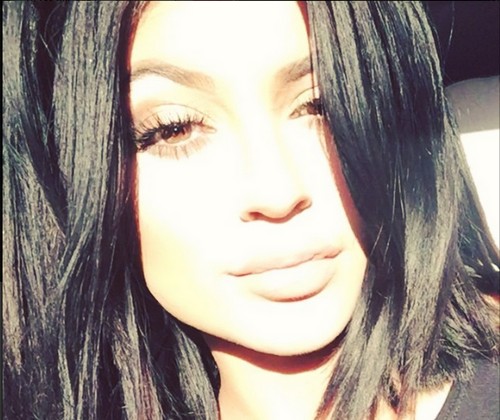 Kylie Jenner and Tyga’s relationship is seriously the worst kept secret in Hollywood – and now the rapper and his 17 year old girlfriend are trying to keep an even bigger secret. Kylie Jenner is pregnant with Tyga’s baby! Considering the fact that Kylie still won’t even admit she is dating Tyga, the odds of her admitting she is pregnant with his baby seem even slimmer. But, all the signs are there – and sources say Kylie Jenner’s family is buzzing with speculation that there is a baby on the way.

Kylie Jenner has been slowly transforming in to a mini Kim Kardashian – it seems like every time the KUWTK star steps out of her house she has switched up her look. Everyone has noticed that Kylie is packing on the pounds rapidly – not that the extra weight looks bad on her. Even Kylie took to Instagram last week to post a Throwback Thursday picture and captioned it “when I was 15 pounds skinner.” Not only does Kylie look heavier and healthier than ever before – but the teen reality TV star has an undeniable glow about her these days.

According to our insiders, Kylie’s weight gain isn’t the only reason her friends and family are speculating that she is pregnant with Tyga’s baby. The 17 year old recently purchased a multi-million dollar home in Cali, near her sisters’ houses. A source close to Kylie’s family snitched to CDL exclusively, “Everyone was shocked when Kylie picked out her house. It was no secret that she couldn’t wait to move out on her own. But, her family expected her to pack up and move across the country to some high-end apartment in NYC, or find an impractical beach house on the West Coast. Instead Kylie shopped around to make sure she got the best price and settled on a house built for a family near her sisters. 17 year olds don’t shop for family houses unless they are planning on starting a family.”

There have been whispers of Kylie Jenner and Tyga having a pregnancy scare in the past – it sounds like this time it is the real deal though. Can you imagine Kylie Jenner being a teen mom and playing house with Tyga and a newborn baby? Let us know what you think in the comments below!