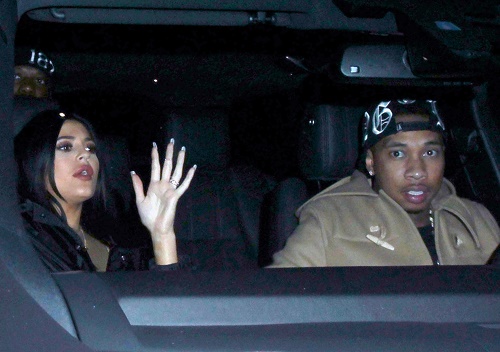 17-year-old Kylie Jenner’s love life has recently come to the center of media attention thanks to her relationship with 25-year-old Tyga. The 8-year age difference between them has caused the couple to come under fire for the appropriateness [or lack thereof] of their relationship. However, Tyga still refuses to confirm that he is dating Kylie Jenner, even though everyone and their mother has already figured it out at this point.

Now, most people assume that Kylie and Tyga began dating around the time that Tyga threw Kylie her 17th birthday party last summer. However, in a clip [via Radar Online] from Kendall Jenner’s Sweet 16 birthday party in November 2011, we see 14-year-old Kylie Jenner flirting and dancing with Tyga. At 14!!

Obviously, it’s not a huge shocker to find out that Kylie had her eyes on Tyga even when she was 14 years old. Both she and Tyga like to pretend as though their relationship only began recently, but let’s be real – they have obviously known each other for a while and been intimate for a significant portion of that time. This video proves that Kylie Jenner has always harbored a little flame for Tyga, and it wouldn’t be the most shocking thing in the world to find out that they had been dating all this time.

Of course, that makes this relationship even more inappropriate than it already is, but then again, what else is new with the Kardashians? It seems like every time we turn around, they’re pushing the boundaries on what is socially acceptable.

What do you guys think about Kylie Jenner and Tyga possibly starting to date when Kylie was 14 years old? Gross? Inappropriate? Or their life, their wish? At the end of the day, they’re not hurting anyone with their relationship, even if it sets a bad precedent for young girls.