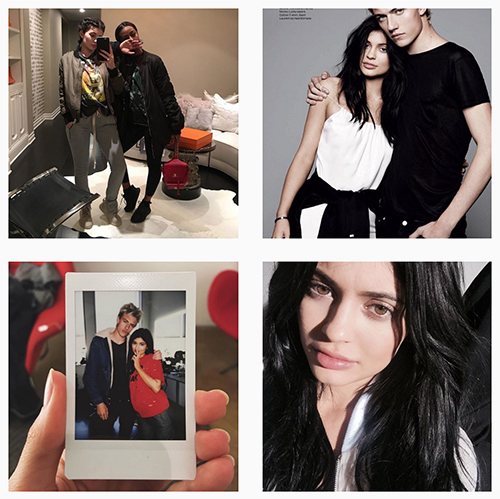 Kylie Jenner threw some major shade at Kim Kardashian and even managed to insult Kourtney Kardashian too. The 18-year-old reality star told Elle Magazine UK in an interview that she’ll shut her Instagram down once she has kids, unlike her exploitative sisters.

During the Elle UK interview, Kylie was asked about her future. Jenner mused that she didn’t see herself competing for internet fame forever. “Once I have a kid I’m not going to be on Instagram,” Kylie said. “You know, I’ll probably delete my Instagram and just… I don’t know, live life.”

Does that mean Kylie Jenner disapproves of Kim Kardashian’s constant social media sharing? It’s no secret that Kylie is has been trying to steal Kim’s crown for years and now that she’s finally 18 years old, her ratings are through the roof. Would Kylie really just retire from social media once she decides to settle down and have a family?

Or was this some not-so-subtle shade thrown at her older sisters, who share pictures of every aspect of their lives still and they share their children’s lives with millions of fans. North West has her own following of paparazzi photographers and Kim has done nothing to shield her daughter from the public eye.

Kourtney Kardashian is just as free with the constant sharing of her three children with ex-fiance Scott Disick. Kourtney posts pictures of Mason, Penelope, and Reign freely and, apparently, that doesn’t sit well with Kylie. The KUWTK star claims she would do things way different once she settles down to have her own family.

When Kylie Jenner settles down, she claims she will just quit being famous. “I would love to have a family and build a home with a farm in Malibu Canyon and just have my kids and throw away my phone, and just really, like, live my life and not do this anymore.”

Does Kylie really daydream about hanging up her fame crown and having a normal life? Would Kris Jenner even allow her youngest earner to just walk away from all the work they have done?